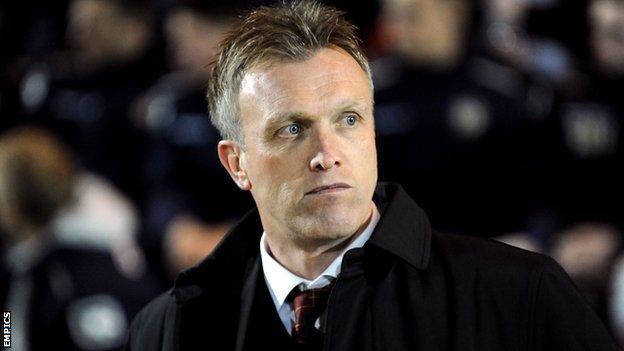 Crewe Alexandra manager Steve Davis is hoping that this Saturday's local derby against Port Vale can prove a turning point in his side's faltering season.

Crewe go into the game against Vale in the League One relegation zone, in 22nd, not having won in six matches.

"There's a decent atmosphere, with a bit more at stake. We have to put this disappointment behind us very quickly."

Recent form in the Crewe-Vale derby

The Alex are 10 points and 12 places adrift of 10th-placed Vale, who have won four of their last five games.

But Davis admits that, although disappointed by the crowd of 1,695 who turned up on Tuesday night, his underperforming team badly owe a response to those supporters who did go.

"We want to do it for the supporters," added Davis. "We've let the supporters down big time, as I really wanted to do well in the FA Cup.

"I've had a decent run in this competition as a player and got to the quarter finals a couple of times.

"But what disappoints me is that the players haven't really grasped how big a competition the FA Cup is."

Davis also further pinpointed his need to make changes to his playing staff.

So far, despite having made the club close to £7million in his two years in charge with the sale of Nick Powell (Manchester United),Ashley Westwood (Aston Villa) and Luke Murphy (Leeds United), Davis has hardly been allowed to spend a penny.

But, although he is keen to bring in reinforcements before the emergency loan window closes next Thursday, Davis and his number two Neil Baker are already eyeing January.

"We've been on the phone the last two or three weeks," said Davis. "I'd love this group to be doing better, but it isn't doing well enough.

"At the moment I'm struggling to get the best out of them. The players we've got aren't doing it, so we've to look at bringing new players in.

"Everyone's had a go. We've tried lots of different things. They've had all the opportunities and not enough have taken them.

"They're struggling to perform. Their confidence is very low. But I'm the one that's got to put it right."