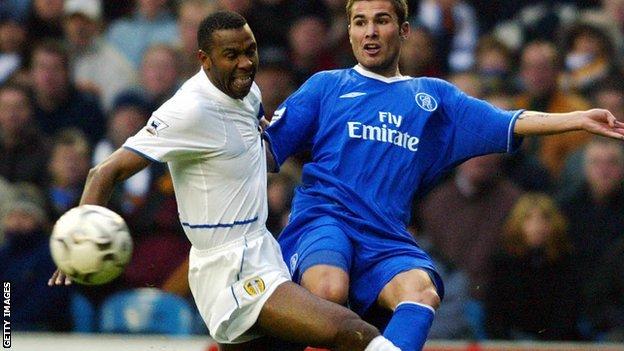 Former Leeds captain Lucas Radebe has confirmed he is part of a consortium that is looking to buy into the club.

On Saturday, the club's owner GFH Capital rejected a bid from a group thought to include 44-year-old Radebe.

He said on his website: "I can confirm that I am part of a consortium which has submitted a preliminary indication of interest regarding the acquisition of a stake in Leeds United.

"We hope to continue our recent discussions confidentially."

In 2010, Radebe told BBC Radio Leeds: "I want to give back to what the game has given me.

"Much as I would like to be on the field of play again, my passion lies with the development of the game at grass roots level in South Africa or coming to join Leeds."

The former South Africa international made 201 league appearances for the Elland Road club between 1994 and 2005 and was part of the Whites squad that reached the Champions League semi-final in 2001.

His consortium is also thought to include Gary Verity, the chief executive of Welcome to Yorkshire, which helped attract the opening stages of the 2014 Tour de France to the county.

"We would like the opportunity to explain both the substance of our proposal, and our strategy for working with GFH Capital to continue the rebuilding process at the club," said Radebe.

"Leeds United has a special place in my heart. Ever since I retired I have been considering ways to get involved at the club - working at board level with an equity interest would be the pinnacle.

"It is my dream scenario. I would not have become involved if I didn't think our consortium would be able to help give the club a chance to go back up to the Premier League where it belongs, and to keep it there.

"I am hopeful we can find a way forward and make progress."

Leeds, who were relegated from the Premier League in 2004, are eighth in the Championship table.