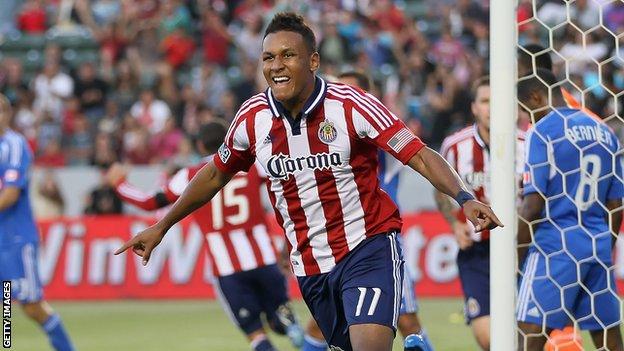 Stoke City's hopes of signing USA striker Juan Agudelo appear to be over after he was denied a work permit.

The 20-year-old had been expected to move in January when his deal with MLS side New England Revolution expired.

And he initially signed a pre-contract agreement with the Potters in August.

Agudelo would have been the fourth USA international on the Potters' books, alongside Geoff Cameron, Brek Shea and Maurice Edu. Stoke's other connection with the United States is that one of their directors, Phil Rawlins, has business interests there and is a co-owner of Orlando City, the latest club to be awarded an MLS franchise.

"Unfortunately, under the rules of the appeal panel system, we were given no explanation why the application was rejected and so can only speculate as to the reasons why we have been unsuccessful.

"The criteria by which the panel should make work permit application decisions are well established and have been in place for some years and, despite recent discussion in the media, that criteria has not changed.

"We are therefore left amazed that our application for a work permit for Juan has been rejected when you compare his talent and ability to players who have been granted a work permit on appeal in the past."

Colombia-born Agudelo represented the United States at under-17 and under-20 level before making his full debut against South Africa in November 2010, when he scored the only goal of the game.

The former New York Red Bulls and Chivas USA forward, who only joined Revolution in May, has scored twice in 17 appearances for his national side.

But he was not included in Jurgen Klinsmann's squad for the past week's friendlies against Scotland and Austria.