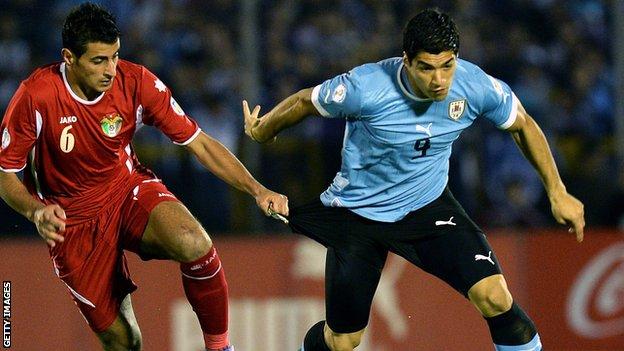 Uruguay became the last nation to book their spot at the 2014 World Cup finals in Brazil with a 0-0 second-leg draw against play-off opponents Jordan.

Uruguay had all but secured their berth with a 5-0 victory in the first leg.

Uruguay dominated a goalless first half in the return leg in Montevideo and came closest to scoring when Diego Godin headed against the crossbar.

"We're all happy because the truth is it's been a hard road," said striker Edinson Cavani.

Uruguay were competing in the World Cup qualifying play-offs for the fourth successive tournament, but knew it would take a miraculous effort for Jordan to overturn a 5-0 deficit,

The South American nation, who are currently ranked sixth in the world, boast a rich World Cup pedigree having won the trophy in 1930 and 1950 and also reached the semi-finals last time out in South Africa.

But Oscar Tabarez's men finished fifth in their continent's qualifying after being edged out of the automatic places by Ecuador on goal difference.

It meant they were forced to negotiate a two-legged tie against a Jordan side, who had beaten Uzbekistan in Asian qualifying to reach the play-off.

However, with Liverpool striker Luis Suarez partnered up front by Paris St-Germain's £55m striker Cavani, they were always likely to have too much firepower for the Middle East nation.

Jordan, who have never appeared at the World Cup finals, are ranked 64 places below Uruguay in the world.