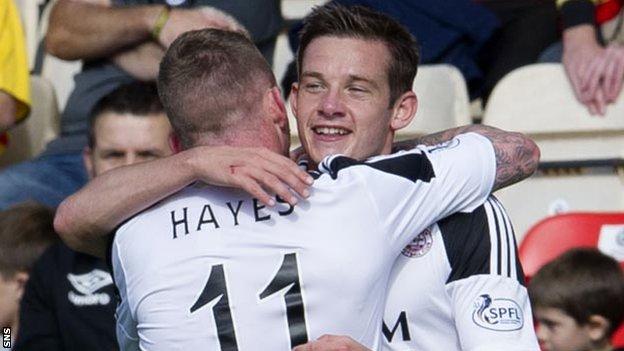 The new deals for Langfield and Hayes are until the summer of 2016, while 22-year-old Pawlett's deal will expire the following year.

Manager Derek McInnes sees important roles for the trio in the Dons' future.

"It is important to ensure you keep your best players," he said in statement on the club website.

"These lads want to win something with Aberdeen, make no mistake about that, and they did not take too much persuading to continue their careers here."

McInnes thought that the news that three key players had committed to the club long-term "gives everyone a lift ahead of the weekend trip to Celtic".

Langfield, who joined Aberdeen after leaving Dunfermline Athletic in 2005, is a Scotland B international and has been called up several times to the senior squad.

The 33-year-old, who previously played for Dundee, Raith Rovers, Partick Thistle and Forfar Athletic, has had nine clean sheets in 15 appearances this season.

Langfield said: "I am delighted with the way things have been going on the park this season and I was delighted when the manager came to me and asked if I would consider staying. It was a great feeling.

"I am really looking forward to the next two and a half years. Hopefully I will still have a few years left in me after that as well, as many keepers are now playing into their late thirties.

"Normally, these things drag on a bit and you have to wait to the end of the season, which creates a lot of uncertainty, but the manager approached the three of us and everything was sorted out in a very short space of time.

"It is a massive weight off my mind and I can now just concentrate on my football.

"We all believe in what the manager and coaching staff are doing here."

Hayes signed for the Dons from Inverness Caledonian Thistle in 2012 and the 26-year-old former Republic of Ireland Under-21 international has made 14 appearances this season.

The Irishman said: "As soon as the gaffer spoke to me, I was happy to sign.

"I had not really given it much thought and the meeting with the gaffer came out of the blue.

"I can now just crack on with my football and not be worrying in three of four months time about whether I would be getting a new contract."

Hull-born Pawlett has come through the Pittodrie ranks, is a Scotland Under-21 international and has been involved in every Dons match this season after a loan spell with St Johnstone last season.