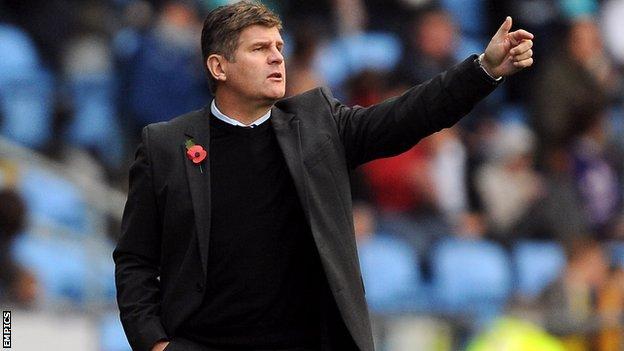 Former Scunthorpe United boss Brian Laws has said he is "exceptionally disappointed" at being sacked.

The 52-year-old had his contract terminated on Wednesday after the League Two side were knocked out of the FA Cup by local rivals Grimsby.

In a statement to the League Managers' Association, Laws said: "To be relieved of my duties, after only 16 league games, when I was meeting my targets is, in my opinion, unwarranted.

"I am exceptionally disappointed."

He added: "The club is only two points off a play-off place and have lost only four league matches this season in what is a really competitive league.

I was appointed at the club at a difficult time, when confidence and motivation were low, and my brief was to rebuild for the future

"We have not suffered any back-to-back league defeats and of the four clubs relegated last season Scunthorpe are currently the highest-placed in League Two."

Laws took over for a third spell at Glanford Park last October but was unable to stop the club from being relegated from League One.

Despite going five games without a win in all competitions, the Iron are just two points outside the play-offs and five points from the automatic promotion places.

The former Sheffield Wednesday and Burnley boss feels the club have acted prematurely given their agreed goals.

"I was appointed at the club at a difficult time, when confidence and motivation were low, and my brief was to rebuild for the future," he said.

"Together the club and I agreed upon a strategy based upon a shared long-term view to first halt the decline of the club's fortunes and avoid a successive relegation.

"The targets that were agreed upon to achieve this vision were: to building a solid defence, foster a togetherness, instil pride and self-belief both on and off the pitch, re-establish relationships with the youth, re-model the team to incorporate increased opportunities to develop our own youth players alongside an appropriate blend of experience and leadership."

Laws' assistant Russ Wilcox has been placed in temporary charge for Saturday's trip to Portsmouth.