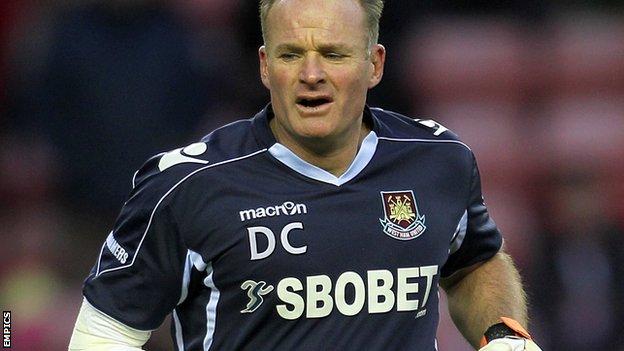 Portsmouth have reappointed David Coles as goalkeeping coach, nearly four years after he left the club.

The 49-year-old spent five years at Fratton Park after arriving from south coast rivals Southampton in 2005.

He joined former Pompey manager Avram Grant at West Ham in 2011 and has spent the past two years working at Al-Jazira in the United Arab Emirates.

Get to know David Coles

Before working as goalkeeping coach in the Premier League with Southampton, Portsmouth and West Ham, David Coles had an extensive playing career in the lower leagues.

He was an apprentice at Birmingham and made his Football League debut at Mansfield Town.

Coles then went on to play for various other clubs including Aldershot, Newport County and Brighton.

He won a championship in Finland with HJK Helsinki before returning to England, playing for non-league Yeovil Town and Gloucester City.

"You don't turn down the opportunity to bring someone like him in," Pompey boss Guy Whittingham told BBC Radio Solent.

Coles takes over from Alan Knight, who gave up the post as goalkeeping coach for health reasons last month.

During his first spell at Portsmouth, Coles was in charge of developing Asmir Begovic, who left the troubled club for Stoke City in 2010, while coaching then-England number one David James.

At West Ham, Coles then worked with another England keeper Robert Green.

Coles was regarded as one of the best goalkeeping coaches in the country before his move to Abu Dhabi, having worked with Finland International Antti Niemi at Saints.

He was also linked with a move to Tottenham.

It will be Coles first job in England outside the top flight, having spent 13 years with Premier League clubs.

"Ultimately he is a very good goalkeeping coach and is capable," Whittingham added.

"When here was last time he was involved in all standards of the club - from the academy to first team - and he is here to do that again."