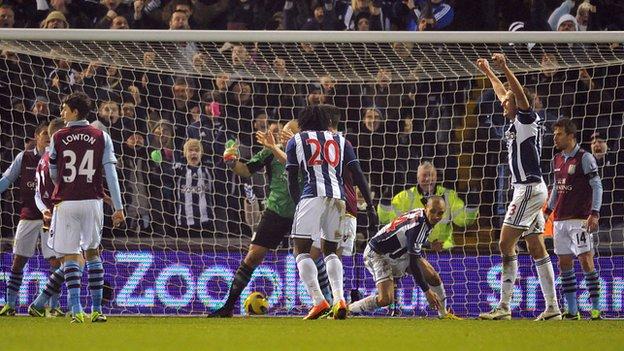 Aston Villa defender Matthew Lowton believes his team can end their run of poor derby results against West Brom when the two old local rivals meet again at The Hawthorns on Monday night.

Villa traditionally have the edge, winning 74 of 160 clashes of the 128-year-old fixture.

Albion, however, are now unbeaten in their last five meetings with Villa.

But Lowton told BBC Sport: "We're going to go there and try to get all three points, which we're well capable of."

Villa had a great chance to win against their fellow Football League founders last season at The Hawthorns, when goals from Christian Benteke and Gabriel Agbonlahor put them 2-0 up in little over half an hour in January.

But Chris Brunt pulled one back just after half-time before Peter Odemwingie's late leveller, with what proved to be his last Albion goal, completed the home side's salvage operation six minutes from time.

"Last year we set off fantastically and were two up at The Hawthorns, and then we let let it slip," recalls Lowton.

"But this year, with the players we've brought in, we're playing some great football and we're definitely going to cause them a lot of problems.

After losing to Albion on Easter Monday 1985, Villa then enjoyed an amazing derby record against the Baggies, going unbeaten in 17 meetings until Albion came from behind with second-half goals form Peter Odemwingie and Youssouf Mulumbu to win 2-1 at The Hawthorns in April 2011

"Derbies are always special and this one should be a fantastic game. We've come off on the back of some great results and we're looking to kick on."

After finishing behind Albion in the Premier League for the past two seasons, Monday night's game will be a mid-table encounter between two teams who are level on points, separated only by goal difference and both looking towards the top half.

"We're not looking down like we were last season," admits Lowton.

"We want to push forward and get as many points on the board as we can.

"We've got a lot of winnable games coming up and hopefully we can keep up the momentum of the last few games."