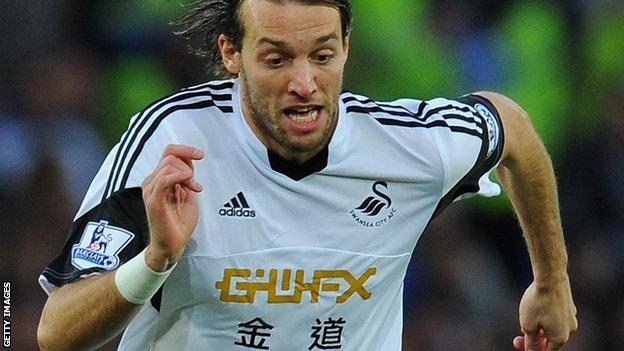 The Spaniard suffered an ankle injury in Swansea's 1-0 defeat at Cardiff and missed games against Kuban Krasnodar and Stoke City.

The 27-year-old will not feature in Saturday's league game at Fulham.

"We have to be careful but if looks much better than first expected.

"Because [we have] so many games we have to be careful not to put one or two in too early.

"I'm confident I will have him back for the two home games against Newcastle and Hull."

Coming back from 2-0 down for that to happen, then to not have a game for two weeks was like a knock to the head

Michu, who has also been hampered by injuries to both knees, will miss Saturday's game at Fulham and next Thursday's Europa League tie at home to Valencia.

Swansea travel to Manchester City on Sunday, 1 December before Newcastle's visit to the Liberty Stadium the following Wednesday.

Laudrup had initially been expecting to be without the Spain international for two games after he twisted his ankle during the south Wales derby defeat on 3 November.

But the injury was worse than originally thought and the former Rayo Vallecano player was ruled out for a month.

Midfielder Pablo Hernandez has resumed training after being sidelined with a troublesome thigh injury but is not expected to feature against Fulham while defender Garry Monk has had knee surgery.

Swansea's last Premier League outing saw them denied a 3-2 win against Stoke City, who were awarded a stoppage-time penalty which Charlie Adam converted to rescue a point.

Laudrup is still aggrieved by the penalty, which referee Robert Madley awarded after he adjudged that Wayne Routledge had handled in the box.

"Coming back from 2-0 down for that to happen, then to not have a game for two weeks was like a knock to the head, but what does not kill us makes you stronger and I am sure it will," Laudrup said.

"I would have preferred to go straight into this game [after facing Stoke], we were so frustrated and angry and it would have been good to play again three days later."