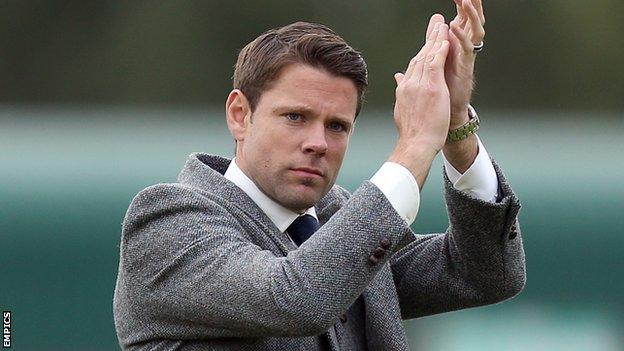 Captain Luke Joyce has praised the Accrington Stanley board for keeping faith in boss James Beattie after a difficult introduction to management.

The Lancashire club failed to win any of their first 12 league games under the 35-year-old former England striker.

But a has lifted Stanley out of the relegation places.

"They've seen what a good manager and a good bloke he is to have at the club. He's adjusted to management fantastically well," said Joyce.

in May, when he replaced Leam Richardson as Accrington manager.

"He's been great with us, especially with the run we had at the start of the season," 26-year-old Joyce told BBC Radio Lancashire:.

"He's not lost faith with us and he's kept us positive, even on the back of some disappointing defeats and performances."

Meanwhile, Joyce is closing on the milestone of 200 appearances for Stanley, who he joined from Carlisle in the summer of 2009.

"I look at it now and think I made a great decision by signing for Accrington, I've loved every day of being here," he said.

"One of the aims when I first signed was to play regular football because it was something I'd not really done earlier in my career.

"I'm made up to have played so many games in just over four years. It shows that I've been in the team regularly and the managers I've had have always picked me."