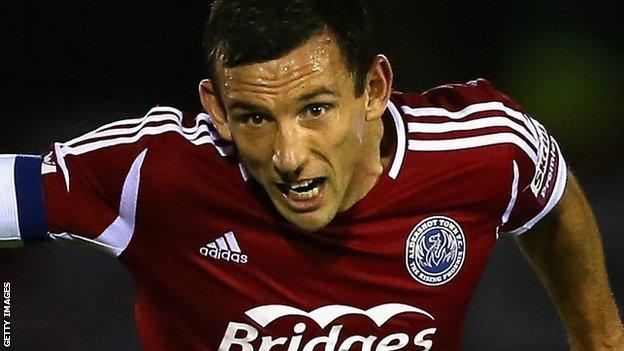 Aldershot captain Craig Stanley says his team's defending must improve if they are to turn their season around.

The Shots are second-bottom in the Conference Premier, having won only one of their last 11 matches and were recently knocked out of the FA Cup by minnows Shortwood United.

"We're conceding too many sloppy goals and a lot are down to individual errors," Stanley told BBC Surrey.

The lads are disappointed and know the last month or so hasn't been good enough.

"You all have bad patches during the season. Ours has come at the minute."

With Aldershot having suffered back-to-back defeats, he added: "It's not just about the defenders. There's 11 players out there and we need to work more as a team and work a lot harder for each other.

"We have been doing that, but I think we need to become a lot more solid and a lot harder to beat because in the last few games it's been not good enough.

"We've played well at times. I just think the first goal has been vital and we haven't really come back from conceding that first goal."

Manager Andy Scott, who has been backed by directors despite recent results, has previously questioned his players' spirit.

But Stanley is adamant that the squad are determined to halt the slide.

"It's for me, being captain of the team, to make sure the lads are in good spirits," he said.

"The spirit's there. The lads are disappointed and know the last month or so hasn't been good enough. We need to start putting in performances.

"When you haven't won for a while the next game becomes vital. We need to maybe win a game very scrappily and just get the confidence back."