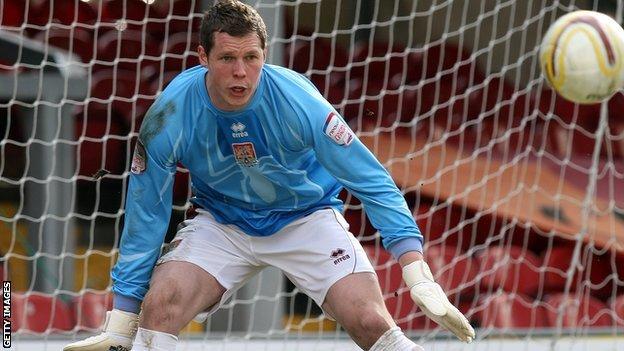 Yeovil Town manager Gary Johnson says he is confident keeper Chris Dunn will prove himself against Doncaster in his first start for the club.

First-choice Marek Stech is sidelined with a hand injury and they cannot re-sign Wayne Hennessey following his three-month loan.

And after Stuart Taylor's loan from Reading was ended after two days, Dunn, 25, has been given the nod.

"We are very confident going in with Chris," Johnson told BBC Somerset.

Stech broke his hand three games in to the season and Championship Yeovil immediately brought in Wales international Hennessey, who made 16 appearances before returning to his parent club earlier this month.

Prior to Dunn's arrival in the summer, following his release from Coventry, Johnson had used coach Gareth Stewart as a back-up.

But the Yeovil boss, who previously worked with Dunn at Northampton, said: "With all due respect to Gareth, he's a keeper coach now, not only a keeper.

"He will do alright when we need him on the bench, but we are coming into a period when we need two Championship keepers and if we get those it gives you the opportunity for those two to compete against each other.

"We don't need a one and a two, we need two number ones. I'm pleased that Dunny has got this opportunity and he will prove he's a decent keeper."

Johnson went on to confirm that former Czech Republic Under-21 international Stech is likely to face another month on the sidelines.

"The healing hasn't been quite right, it need another four weeks, so we have got to bring in somebody to cover that time," he added.