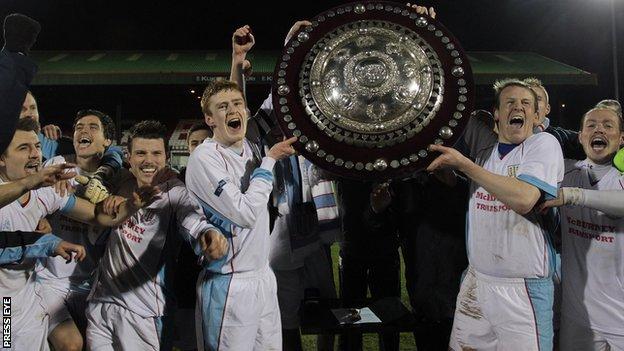 The County Antrim Shield final between Crusaders and Linfield has been put back until next year because Glentoran have refused to host the game.

The match had been scheduled for 4 December at the Oval but Glens have now decided the match cannot go ahead at their east Belfast ground.

It follows Linfield's refusal to sell tickets for the match.

Linfield said they were unhappy at the decision to make the final an all-ticket match.

In response to that move, Glentoran said they would no longer be prepared to host the game.

The County Antrim FA will now have to find a new venue and date for the match.

On Friday, they said the match would take place in early 2014.

A statement from the association added: "It is regrettable that Linfield waited until tickets had been distributed to participating clubs, and indeed had been on sale at Crusaders' outlets, before deciding not to sell their allocation."

The dispute will be seen as a blow for a competition which no longer has a sponsor and is regarded as a relatively minor piece of silverware in senior football circles.

This season the six senior clubs from the County Antrim divisional region took part, along with intermediate clubs Donegal Celtic and Lisburn Distillery.

Linfield reached the final by beating Ards and Cliftonville while Crusaders saw off Lisburn Distillery and holders Ballymena United.

According to the competition organisers, Linfield turned down the option of tossing with Crusaders for home advantage.