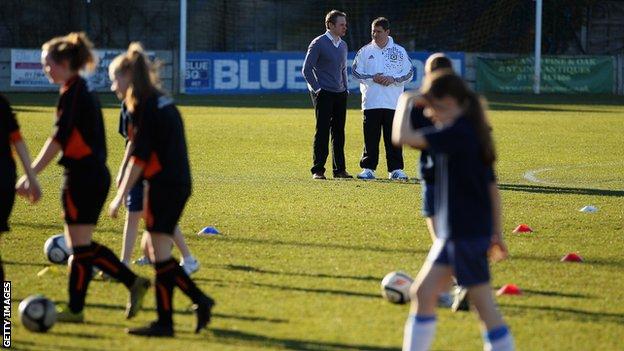 Football clubs are aiming to get 40,000 more women and girls playing the sport with a new £2.4m grassroots scheme.

Season-long coaching sessions will be aimed at 14-25-year-olds.

This is great news for women's football at the grassroots level

The Football Association and Sport England are joining forces with the Premier League and the Football League to deliver the programme.

He added: "Premier League clubs are in a unique position to do that."

FA general secretary Alex Horne added: "This is a fantastic initiative. The professional clubs' brands will attract more players and we know that qualified coaches will deliver top-class coaching sessions just where we need them."

According to the Women's Sport and Fitness Foundation, 131,000 women aged over 16 play football every week.

Sport England chief executive Jennie Price said her organisation was pleased to invest in what she called "a powerful initiative".

Clubs will work with county FAs, schools, colleges and universities to attract participants to the coaching sessions.

Minister for sport Helen Grant said: "This is great news for women's football at the grassroots level."

The FA launched a five-year plan to boost women's football in October 2012.