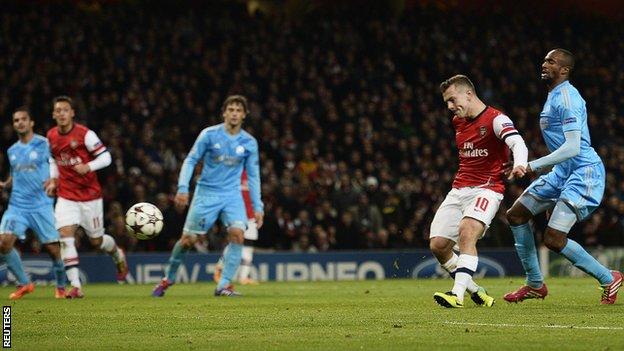 Arsenal manager Arsene Wenger's bright mood was reflected in his joke to shrug off Mesut Ozil's missed penalty - agreeing a rare German blemish from the spot was "good news for England".

The better news for Wenger and England manager Roy Hodgson was the two goals scored by Jack Wilshere, the first double of his career, as Arsenal moved to the brink of qualification for the Champions League knockout phase with a 2-0 win over Marseille.

Hodgson is hardly in a slump, having guided England to the World Cup in Brazil by remaining undefeated in their group, but friendly losses to superior opposition in the shape of Chile and Germany have removed some of the optimism of qualification.

The idea of a German superstar missing a penalty may appeal to any sense of mischief Hodgson harbours, but the thought of Arsenal's Wilshere fulfilling his promise, with the added gloss of goals, will be of more serious interest.

Wilshere was the focal point of an Arsenal win that means they need only avoid a three-goal defeat to reach the Champions League's last 16.

And Hodgson will be examining Wilshere's performances for signs that he might finally put an injury-interrupted run behind him and become the significant influence his admirers believe he will be for club and country.

There is no doubt Wilshere needed to find improvement in his game, even within the context of Arsenal's excellent start to the season, as he found himself overshadowed by a rejuvenated Aaron Ramsey. And there were moments to savour at Emirates Stadium, particularly a goal after 27 seconds.

It came, admittedly, against a largely uninterested Marseille, who fielded a reduced team to save their energies for other matters as they remain without a Champions League point. But there was real pedigree as Wilshere found space in the box to curl a left-foot finish precisely past keeper Steve Mandanda.

He then almost set up another for Ramsey before finishing off Ozil's fine pass for the second after 65 minutes.

But the fact this was the first time he had ever scored twice in one match - he has only nine goals in his club career - highlights one of the flaws in his game that Wilshere is determined to address.

Wenger had noticed - even commented on - the fact his England midfielder might not be a regular scorer, and if he adds this extra dimension Hodgson will be a happy man too.

Midfield is one of the areas where the national boss must wrestle with key decisions - and Wilshere has not distinguished himself for his country in recent times.

He had a particularly tough night in the goalless World Cup qualifying draw with Ukraine in Kiev, shrugged off the ball with ease too often as well as showing carelessness in possession.

Wilshere has inevitably been paying the price for a career so often unfortunately interrupted by injury and it is clear Hodgson will have him in mind for a starting role in Brazil if he puts a sequence of his best form together.

Hodgson, like Wenger, will want goals from midfield as he surveys his options for Brazil.

He may not want to take all three of his 30-somethings, Steven Gerrard, Frank Lampard and Michael Carrick. Gerrard will clearly go as captain and it may be that even 35-year-old Lampard is vulnerable.

What is certain is that the supply of goals from Gerrard and Lampard is not as plentiful as it once was and Carrick has never been a regular scorer.

How can Arsenal progress?

Manchester United's Tom Cleverley shows no signs of becoming a serious international player, and although Everton's Ross Barkley is an outstanding talent who may yet have a role to play at the World Cup, a goalscoring Wilshere would become an even more precious commodity in this context.

For his club, this was another highly satisfying night in a satisfying group that has somehow yet to yield qualification for the knockout stage.

It is an indicator of the quality of Group F, with Borussia Dortmund and Napoli also fighting to qualify, that Arsenal are three points clear with only one game left and could still go out.

Wenger will believe they can get at least a point - and certainly avoid that three-goal loss that could send them out.

And he has every reason to be pleased when he examines Arsenal's season so far - four points clear in the Premier League and on top of their Champions League section. It provides the perfect base to move the season on to its next phase.

If it can be done with Wilshere moving back towards the levels so many expected before injuries began to hamper him, then Wenger's justified optimism that Arsenal can end those long years without a trophy will only increase.