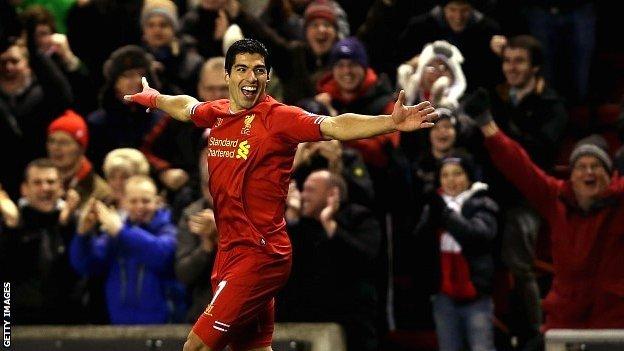 The Uruguayan opened the scoring with a 40-yard lob over John Ruddy before sweeping in Philippe Coutinho's corner.

Suarez slammed in a fierce half-volley to complete his hat-trick and grabbed his fourth with a dead-eyed free-kick.

Bradley Johnson nodded in a consolation for Norwich before Raheem Sterling swivelled to fire in the hosts' fifth, but the match belonged to Suarez.

The striker was withdrawn late on by manager Brendan Rodgers to a standing ovation and received a second as he returned after the final whistle to retrieve the match ball.

It was a performance that kept Liverpool in the top four and on course for the Champions League qualification that Suarez will surely demand as the minimum required from his club this season.

The 26-year-old, who has now scored 11 goals in his last four meetings with Norwich, busied himself from the off, demanding the ball from his team-mates and making runs.

Unfortunately for Liverpool their early chances fell to Jordan Henderson rather than Suarez and the midfielder twice sent shots into the stands when he had sight of goal.

After a toothless display in defeat by Hull at the weekend, Reds fans, deprived of the services of the injured Daniel Sturridge, may have feared more frustration.

But in 20 minutes Suarez had devastated Norwich and finished the game as a contest.

In contrast to Henderson's tentative attempts from good positions, Suarez proved he did not even need a half-chance to score.

There appeared little danger as he turned on a bouncing ball midway into the Norwich half, but Suarez detected a slight error in Ruddy's positioning and ruthlessly punished it with a dipping shot that crashed over the goalkeeper into the bottom corner.

Ruddy may have remembered being beaten from similarly long range by Suarez in a 3-0 defeat at Carrow Road in April 2012 as he retrieved the ball from the back of his net.

Suarez's second exhibited his predatory instincts as he hooked Coutinho's skidding corner into the roof of the net, before another sublime strike completed his hat-trick six minutes later.

After he had flicked the ball over a hesitant Leroy Fer and the rest of the Norwich defence stood off him, Suarez took up the Kop's urgings to shoot and almost inevitably the ball arrowed into the corner of the net.

Things may have been different for Norwich had Gary Hooper, rather than Wes Hoolahan, been on the end of a chance when the scoreline was still blank.

But the summer signing, who scored the winner against Crystal Palace at the weekend and had spoken about his excitement at playing at Anfield in the build-up to the game, was surprisingly left on the bench.

As it was, Norwich spent the second half searching for a consolation while Ruddy minimised the damage at the other end with stretching stops from Joe Allen and Suarez.

After Suarez had celebrated a precise set-piece with an almost embarrassed smile, the visitors scored a high-quality goal of their own to blemish Liverpool's defence.

Liverpool have scored 5 or more goals in a single Premier League game five times under Brendan Rodgers, only one fewer than Rafael Benitez managed in six seasons.

Johnson's precise header in front of Daniel Agger from a Nathan Redmond cross means the Reds have kept only one clean sheet in their last 12 games.

But Liverpool's defensive fragilities were a concern for another day as Suarez turned creator, providing a low cross for Raheem Sterling to power home, before heading to the sidelines to take the home fans' acclaim.

Shots on Target
Home12
Away5