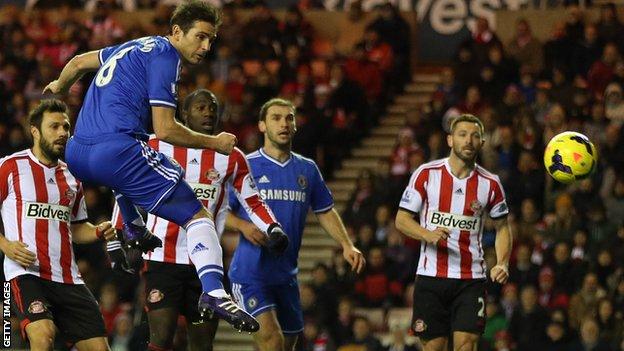 The Black Cats were ahead through Jozy Altidore's first league goal for the club before Frank Lampard levelled with a close-range header.

Hazard put Chelsea ahead with a curling 20-yard strike, John O'Shea equalising after a scramble before Hazard's powerful finish made it 3-2.

Phil Bardsley's own goal made it 4-2 before he scored at the right end.

Without Eden Hazard this evening, Chelsea would have been really struggling.

It could have been worse for the hosts, Fernando Torres blazing a glorious chance over the bar while O'Shea was fortunate to stay on the pitch after a foul on Demba Ba as the Chelsea substitute was lining up a shot.

Chelsea had arrived at the Stadium of Light with two wins in six games on their Premier League travels, and manager Jose Mourinho bemoaning a lack of consistency from his players.

But the Blues remain second in the table, four points behind leaders Arsenal, after a gritty performance earned a third straight league win.

They did it the hard way, the Blues falling behind for the third successive game after Altidore got the better of John Terry in the 14th minute to lash home from 10 yards.

But unlike Sunday against Southampton, Mourinho did not have to wait almost an hour to see his side respond.

This time Chelsea were on level terms within three minutes, poor defending allowing Lampard to mark his return to the team by nodding Juan Mata's cross into the net unchallenged from six yards.

Sunderland, having started so brightly, were on the back foot.

Midfielder Eden Hazard has scored 21 goals in 80 league and cup games for Chelsea.

Torres blazed over when he should have done better before Hazard put the visitors ahead with a delightful finish, the Belgian producing a clever piece of trickery before curling a low 20-yard shot beyond goalkeeper Vito Mannone in the 36th minute.

Sunderland, who had beaten Manchester City and Newcastle in their previous two home games, rallied.

They were level when O'Shea poked home from close range after the visitors had failed to deal with a 50th minute corner.

But Hazard, whose performance was described as "amazing" by Mourinho afterwards, capped a fine individual performance with another tremendous finish after latching on to Lampard's 62nd minute back-pass.

Chelsea went 4-2 ahead when Bardsley turned the ball into his own net in the 84th minute while trying to clear a low centre from Blues substitute Demba Ba.

Bardsley did manage to score at the right end two minutes later, but it was not enough as Chelsea secured an incredible ninth straight Premier League win at Sunderland.

"Maybe we needed one more corner today, one extra corner in the last six minutes. But we didn't get it.

"It was a great display [by Hazard], probably the best I have seen this season from an individual player."

"It was a very good performance.

"Even defensively, I think we did well, but the set-pieces... In the last six minutes of extra time, if they had two more corners, they would have won 5-4.

"When you play so well, you have to win comfortably and not give a headache to the manager in the last six minutes."