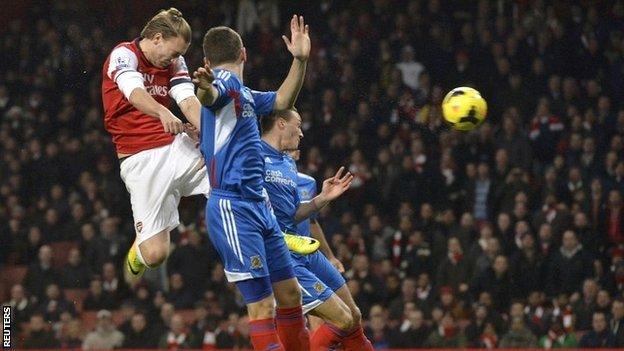 Mesut Ozil stroked in from Aaron Ramsey's deft pass to make it 2-0 after 47 minutes.

Jake Livermore had a rare Hull shot but fired straight at Wojciech Szczesny.

Hull boss Steve Bruce said just before kick-off that "it might have been foolish" to play with two strikers in attempt to earn a result, having secured a surprise win against Liverpool on Sunday.

But his side could probably have played with 12 players and still struggled to contain Arsenal's precision passing and clever movement as Ozil, Ramsey and Santi Cazorla weaved all sorts of patterns in midfield to secure a sixth victory in seven Premier League games.

With questions being raised about Arsenal's ability to maintain their title challenge, having last won the Premier League title 10 seasons ago and with Bendtner as the only back-up for first-choice striker Olivier Giroud, the 25-year-old's early goal signified another piece of the jigsaw falling into place.

Arsenal now face games against Everton, Manchester City and Chelsea before Christmas where their title credentials will be rigorously tested.

So it was understandable that Gunners boss Arsene Wenger shuffled the pack, deciding to rest Giroud, Mikel Arteta and Jack Wilshere among five changes to the side.

Bendtner, who has had a woeful period at the club after loan spells at Juventus last term and Sunderland the previous season, made his first Premier League start for Arsenal since 5 March 2011.

But he wasted little time in making his mark by heading in Jenkinson's precise cross after a sweeping Gunners move down their right.

That led to a sustained period of pressure from the hosts with Hull barely able to get out of their own half. There appeared little chance of the Tigers repeating their 2-1 win at Emirates Stadium in 2008.

In that time, Bendtner could have had another goal but was let down by a poor touch after McGregor has spilled Ozil's shot. Laurent Koscielny, Cazorla and Ozil also went close before half-time with McGregor saving superbly to deny Ramsey.

It took 15 minutes for the visitors to have any sort of sustained possession in Arsenal's half and Danny Graham's header was their first effort on target after half an hour, the only surprise at the break was that it was only 1-0.

Arsenal began the second half as they did the first and doubled their lead after 47 minutes.

Despite suggestions the ball had gone out of play in the build-up, Nacho Monreal appeared to keep the ball in, fed Ramsey and the Welshman's delightful pass found Ozil for the German's fourth goal of the season.

Ramsey and Bendtner could have added a third, and although Hull improved in the final third of the match, the contest was played at an intensity that suggested it was already won.

Only Livermore came close after a decent run as Arsenal secured their fifth clean sheet in their last six Premier League games.

Hull City boss Steve Bruce: "The one thing you want to do is start well and they have scored a wonderful goal, we've been done on a one-two in a wide area, but it's wonderful. Arsenal are confident enough and then when they go 1-0 up early on it becomes a difficult evening for us.

"I was delighted to get back into the game but lo and behold we did the same thing in the second half but late on we rolled our sleeves up otherwise it could have been embarrassing."