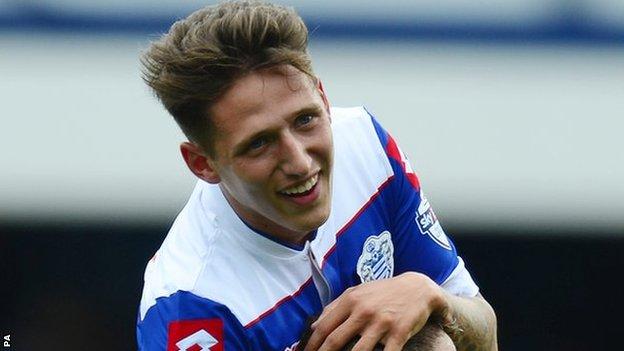 The 21-year-old goes straight into the Alex squad for Saturday's home game with Crawley after signing a deal tying him to Gresty Road until 7 January.

Mesca, Crewe's second signing from Fulham in a week following the arrival of is also signed up until 7 January.

Chelsea signed Bissau-born winger Mesca from Sporting Lisbon in May 2010 before moving him on to neighbours Fulham the following summer.

He made his Premier League debut against his former club at Stamford Bridge in September.

Hitchcock, son of former Mansfield and Chelsea keeper Kevin, has mostly been kept sidelined at Loftus Road since being signed by Mark Hughes from Blackburn in July 2012.

But he scored his first goal for QPR in a 1-0 win over Ipswich in August, coming off the bench seven minutes from time to hit a 90th-minute winner.

He signed a new one-year deal with Rangers this summer.

Crewe are light on attacking options, having so far spent the entire campaign without last season's top scorer Mathias Pogba.

In addition, Max Clayton looks likely to and fellow teenager Ryan Colclough has endured a string of injuries.

Hitchcock should be available for seven matches during his five-week long stay in Cheshire.