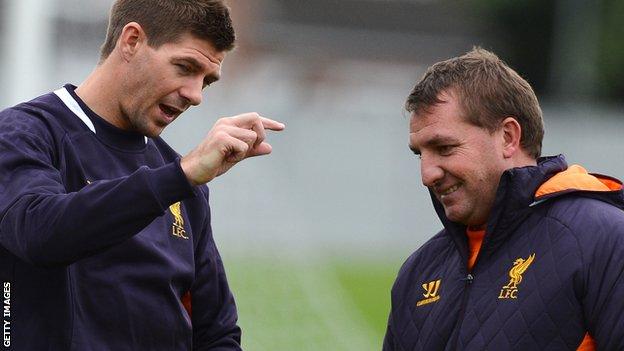 Steven Gerrard could play as a central defender in the future, according to Liverpool manager Brendan Rodgers.

Gerrard, 33, has been an influential midfielder at Anfield for more than a decade but Rodgers says the player could adapt to prolong his career.

"I look at Steven and I think he can play as a number two centre-half later in his career," the Reds boss said.

"You play against teams where they've got one up [front] and I think he can play as a right-sided centre-half."

Gerrard signed a new two-year contract in the summer that will see him stay at Liverpool beyond his 35th birthday.

The Liverpool and England captain, who made his club debut in 1998, has spent his whole career at Anfield and has won the Champions League, a Uefa Cup, two FA Cups and three League Cups so far.

And on the day that Manchester United midfielder Ryan Giggs turned 40, Rodgers outlined his plans for how Gerrard could extend his own playing time in the game by changing positions in the future.

"[He could] build the game from behind," said Rodgers. "How he passes the ball is as good as anyone in the world, short and long.

"So it's a possibility that he could go on, but it will all be determined by fitness.

"He is 34 at the end of this season, and I look at his fitness and I look at how he is playing and he is as fit as he has ever been. He is looking after himself.

"That player he was 10 years ago, dynamic and making those long bursting runs, of course that goes out of your game.

"Like you see with Ryan Giggs, you adapt and change."