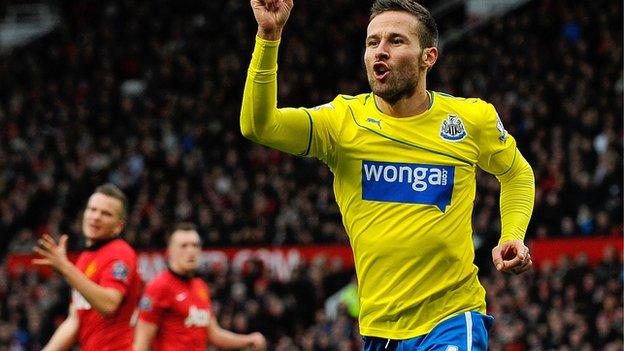 Manchester United slumped to their second home Premier League defeat in the space of four days as Yohan Cabaye's goal gave Newcastle a first league victory at Old Trafford since 1972.

The home side struggled to break down the Magpies, other than a flurry of chances at the start of the second half, with Patrice Evra heading against the post before the ball rebounded against Vurnon Anita's arm.

Robin van Persie had a header disallowed as Manchester United tried to respond, but Newcastle held on for a famous victory which means home form that had been cause for concern for boss David Moyes is now turning into a crisis.

The Scot's side have dropped 13 points out of 24 in front of their own fans this season and suffered back-to-back league defeats at Old Trafford for the first time since the end of the 2001-02 season.

Wednesday's loss to Everton meant Moyes's side came into this game already trailing leaders Arsenal by 12 points and in danger of being out of the title race by Christmas. At this rate, a top-four place will also be beyond them.

Old Trafford has been the site of many a late goal to deny visitors victory in the past but large numbers of home fans had left before the end, clearly believing an equaliser was beyond their side.

The same problems that have haunted Moyes all season were present here - a lack of creativity in midfield, and a vulnerability on the break at the back.

Chances were thin on the ground in a cagey first half, as Newcastle's five-man midfield worked hard to keep their hosts quiet.

With Wayne Rooney suspended, Van Persie's return after four games out was a welcome boost for Moyes and the Dutchman was expected to provide the spark in attack.

There was little inspiration in that department, however, and a tame Phil Jones shot from the edge of the area was the only time Krul had to make a save in the first half.

In fact it was Newcastle who had the best effort before the interval, when Mathieu Debuchy found space to fire in a shot from the right of the area that was pushed away by David De Gea.

Manchester United looked more like their old selves at the start of the second half, when Javier Hernandez tested Krul and Evra's header was only kept out by a combination of the post and Anita.

But Newcastle survived and hit back in style just after the hour mark when Sissoko escaped down the right and found Cabaye waiting to fire home from his pull-back.

And, for the third time on home soil this season, there was to be no Manchester United comeback.

Van Persie had a goal ruled out for offside, Adnan Januzaj was denied by Krul and substitute Wilfried Zaha curled a shot wide but, in truth, Newcastle did not face anything like a late onslaught. Van Persie was otherwise anonymous, and this was a largely insipid display.

The last time Manchester United lost successive home league games, the title was already lost and they finished third. To most of their fans, even that must seem like a distant dream.

"Sometimes when you get victories of this manner it's difficult to digest straight away. The headlines might be elsewhere but I hope the players get credit for their performance.

"I could still hear our fans singing when I was down the tunnel. It's a huge win for them.

"I knew our players were very conscious of those 41 years and were determined to put that right, although it is easier said than done."

To see a gallery of images from today's Premier League games go to the BBC Sport Facebook page.