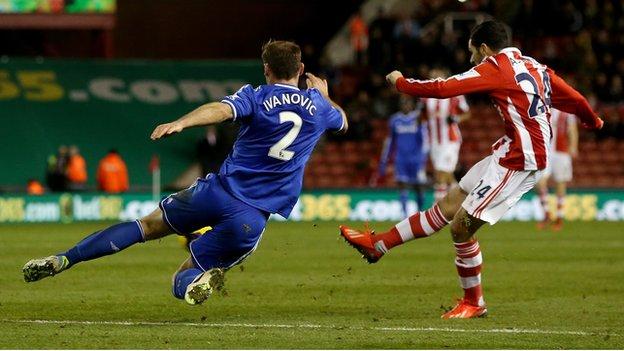 Oussama Assaidi scored a superb late winner as Stoke City came from behind to stun Chelsea and earn just their fourth Premier League win this season.

A lovely curled effort by substitute Stephen Ireland put the Potters ahead after the break only for Schurrle to level with a magnificent half-volley.

Schurrle then hit the bar but Assaidi's angled strike left Chelsea in third.

The gripping finale, and a home victory, seemed highly unlikely as a Blues side who could have moved within one point of leaders Arsenal dominated the first 35 minutes.

Having fallen behind in each of their past three games, a seemingly more defensively minded Chelsea line-up saw manager Jose Mourinho leave out Frank Lampard and Willian for John Mikel Obi and Schurrle.

But Mourinho's changes allowed Chelsea to boss the midfield and also had an immediate impact in the final third.

Mikel played a pacy pass into Schurrle, who turned sharply before running purposefully towards goal and drilling a fine low cross-shot into the bottom corner.

It was the start of a lengthy spell of Chelsea domination, both in terms of possession and territory.

The chances were not clear-cut but the visitors looked in control and Stoke, who had won just once in 11 previous games and had failed to score in seven of their 14 games, were barely threatening.

A tame Jonathan Walters header that went well wide of the post after a decent move was their only noteworthy attempt, however they managed to draw level by the break and took full advantage of Chelsea's failure to kill the game off.

Blues keeper Petr Cech hesitated as a long corner drifted into the box and was unable to recover his position in time to keep out Crouch's low strike.

Buoyed by their equaliser, Stoke started to show the belief and intensity they were missing before the break and their attacking intent was rewarded within five minutes.

Walters, restored to the side after his run of 102 consecutive Premier League starts came to an end in midweek, outmuscled Cesar Azpilicueta on the right flank and found Ireland, who curled a brilliant shot past Cech and into the far corner.

But a Chelsea side well versed in fightbacks were level just two minutes and 21 seconds later when a venomous first-time half-volley from Schurrle flew into the net from 20 yards following a Mata free-kick.

Schurrle almost completed his hat-trick soon after, but his curled effort from the edge of the box smashed against the bar and to safety.

"Chelsea dominated the first half and gained the early initiative and there only looked being one winner. But they could not make it count and Stoke earned the points with a fine comeback after a much-improved second half."

But Stoke, who had won only once in the league since August, were posing just as great a danger. Ryan Shawcross knocked a shot over the bar and Ireland should have scored from the angle of the box on the left, but shot wastefully over.

And with both sides leaving big gaps, Stoke broke forward and Assaidi, on loan from Liverpool, cut in from the right to score his first Premier League goal with a beautiful strike that found the top corner.

Chelsea slipped a place as a result, with Liverpool ahead of them on goal difference after a 4-1 defeat of West Ham.

To see a gallery of images from today's Premier League games go to the BBC Sport Facebook page.

"It was a great result for us. I thought it was a fantastic game. From start to finish we put in a real performance.

"We had to recover very quickly from the disappointment of going behind in the game. I thought we showed real character and we stuck at it.

"Chelsea gave us a little bit of a runaround in the first half and we had to hang on in there, but that's what we did.

"In the second half I thought we were excellent, and the two goals we scored were absolutely outstanding.

"It was another blow having got our noses in front to concede almost immediately. That was a test of character as well but we stuck at it.

"From our point of view it's a huge result because we've set our standards today and we need to maintain them."