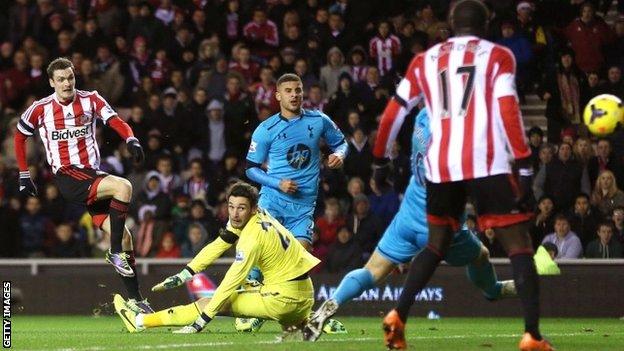 Sunderland remain rooted at the bottom of the Premier League table as Tottenham eased the pressure on manager Andre Villas-Boas with a gutsy win.

A Hugo Lloris error allowed Adam Johnson to confidently score from eight yards to give Sunderland the lead.

Paulinho poked in at the near post to level and Spurs then went ahead thanks to John O'Shea's clumsy own goal.

Jermain Defoe twice struck the woodwork and Sunderland had a worthy penalty appeal turned down in a lively match.

Tottenham substitute Sandro appeared to handle the ball when defending a second-half corner, but referee Lee Mason dismissed Sunderland's protests and so went the home team's hopes of dragging themselves back into contention.

A second home defeat of the week - albeit against Champions League hopefuls Chelsea and Tottenham - leaves the Black Cats five points adrift from safety.

It also means manager Gus Poyet must hope for maximum points against fellow strugglers West Ham next week if his team are to achieve their target of reaching 16 points by the end of the year.

At the other end of the table, two points adrift of a Champions League spot, are Tottenham and Villas-Boas seems to have silenced his critics, for now at least, with a second successive victory.

Indeed, the visitors could have won by a handsomer margin, with Defoe's intelligent running causing problems, but Tottenham - whose goal tally this season now moves to 15 - continue to lack a certain ruthlessness in front of goal.

The numerous chances each team enjoyed was a far cry from the opening half-hour which was a tale of half-opportunities and hopeful attempts from distance with both defences holding firm when under attack from forwards lacking poise and composure in the final third.

Paulinho and Lewis Holtby took aim from outside the box for Tottenham, while Jack Colback and Steven Fletcher wasted opportunities for Sunderland.

The game's first attempt on target arrived in the 32nd minute thanks to a tame Nacer Chadli header, which failed to trouble Vito Mannone in the Sunderland goal.

But, then, the match burst into life when Lloris made the baffling decision to punch Ondrej Celustka's trivial-looking cross towards the far post. The ball fell into Adam Johnson's path and the midfielder struck for his first league goal of the season.

Tottenham had monopolised possession in the 10 minutes leading to the opener so it was perhaps deserved when the equaliser arrived almost immediately. Chadli headed a deep free-kick towards Paulinho and the Brazilian stabbed home at the near post.

Unfortunately for the hosts, the visitors did not take long to double their advantage after the break with Tottenham's first real attack resulting in a goal as O'Shea flicked Mousa Dembele's cross into his near post.

It was the fifth own goal the Black Cats had conceded this season, and within minutes they could have fallen further behind but for superb defending from Johnson when the unmarked Holtby was ready to pounce.

But Sunderland were retreating towards their own goal and Tottenham were growing in confidence.

Only the crossbar prevented Defoe from extending Tottenham's lead with a close-range header, while the striker dragged another glorious opportunity wide after being set free by the ever-alert Holtby.

The match ended in a hat-trick of wasted chances for Defoe as he cleverly darted across the goal and struck the post with a deft flick.

But Sunderland continued to search for the equaliser with Fletcher, standing on the edge of the box, heading Seb Larsson's cross wide and then came the convincing penalty appeal.

Substitute Fabio Borini went close late on as Spurs failed to deal with a tricky Larsson cross, but Tottenham saw off the danger to extend their unbeaten run over Sunderland to seven league matches.

Tottenham manager Andre Villas-Boas: "It was a very important win for us. It completes a good, good week, a good start to December.

"Two away fixtures, a Premier League midweek fixture and Manchester United at home was always a difficult scenario following our defeat against City, so it's a great fightback from the team finally completed. And we have put ourselves back on track in a position where we can challenge for the top.

"Credit to the players. Our group has been immense in this situation that we faced and fought back to these great results recently."

Sunderland boss Gus Poyet on conceding five own goals this season: "One, two, three - bad luck. Five? Too many. Me, I believe in coincidence once, twice. Five? No, I don't.

"Somehow always something happens. Who is going to be next? Do you know? Let me know so I don't play him."