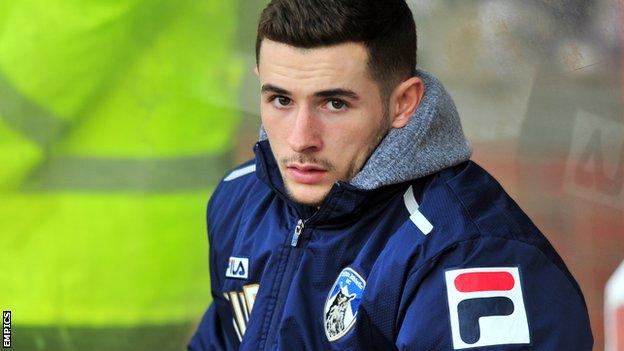 Bottom club Hyde ended a winless run of 29 league matches going back to April as strikes from Louis Almond and Connor Hughes earned victory at Welling.

Scott McNiven's side - one of the few part-time teams in the Conference Premier - had not won in the league since 9 April last year.

They had previously collected four points from 27 league games this term.

The club tweeted: "Thanks to all fans old and new who came down tonight, you were fantastic!"

Jonathan Reynolds, the Labour MP for Stalybridge and Hyde, wrote on Twitter: "Hyde have won! Get in. The season starts here. Well done."

He added: "Definitely time to book an open-top bus!"

Hyde had also lost both of their cup fixtures in 2013-14, and claimed their maiden victory of the campaign in their 31st outing.

The Greater Manchester-based club, whose Ewen Fields home is used by Manchester City for Under-21 Premier League matches, stayed part-time after winning the Conference North title in 2012.

In the nine months since Hyde's last win, there have been 37 changes of manager in the Football League

They survived relegation by five points last season, but started the current campaign with an 8-0 defeat at Forest Green.

McNiven's side, however, had led in 10 of their 27 Conference Premier games this season before the trip to Welling, without managing to hold on for victory in any of them.

The Hyde manager, who combines his football duties with a full-time job as an account manager for an insurance company in Lytham St Annes, saw his side held 1-1 at Southport last Saturday, having been in front with 12 minutes to go - although that result still ended a run of nine successive defeats.

But that wasn't the closest Hyde had come to victory before winning at Park View Road. On 2 November, they went 2-1 up against Nuneaton in the 92nd minute through Scott Spencer, only to concede an equaliser in the 93rd.

Spencer almost put Hyde ahead at Welling, as he had an effort cleared off the line for the visitors after Baily Cargill went close for the home side.

Almond put the Tigers ahead with a curling 25-yard effort and Hughes secured maximum points with a superb volley from outside the penalty area.

The victory moves the club up to seven points. But they are still 12 points behind Dartford in 23rd, and 19 points adrift of safety with 18 games left.

Hyde's win has ensured they will not become the first team in the Conference's 35-year history to go through a league season without a victory.

No Premier or Football League club has ever suffered that fate either - although it has happened to a number of clubs lower down the English non-league pyramid.

And Hyde's Tameside neighbours Droylsden are bottom of this season's Northern Premier League Premier Division with no wins and just two points from 29 matches.