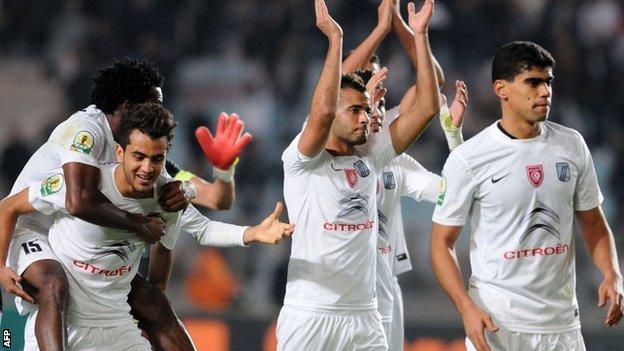 The Tunisians went into the deciding tie in Lubumbashi with a 2-0 advantage from last week's first leg in Rades.

But the Congolese giants evened up the tie with two goals in the first 23 minutes through strikers Cheibane Traore and Mbwana Samata.

The visitors soaked up the pressure and struck late, with an 88th-minute header from forward Fakhreddine Ben Youssef to wrap up the title.

Mazembe's French coach Patrice Carteron had said before the tie that his team would need to do something special to turn the tables on the Tunisians, and they quickly restored parity.

Sfaxien, coached by former Dutch World Cup captain Ruud Krol, dealt with the home side's onslaught and hit back two minutes from time through Tunisian international Ben Youssef to secure the trophy for a third time.

Ben Youssef proved his value for his club, after also being involved in both Sfaxien goals in the first leg.

The victory also caps a fine year for Krol, after he led the Sfax club to their first league triumph in eight years in May.

That achievement led to him being given the chance to take charge of the Tunisia national team for the country's final World Cup play-off match against Cameroon.

They pocket $660,000 (nearly 500,000 euros) in prize money and will take on Champions League winners Al Ahly of Egypt in the prestigious Confederation of African Football Super Cup next year.

The Confederation Cup was launched in 2004 when the African Cup Winners' Cup and Confederation of African Football Cup were combined.