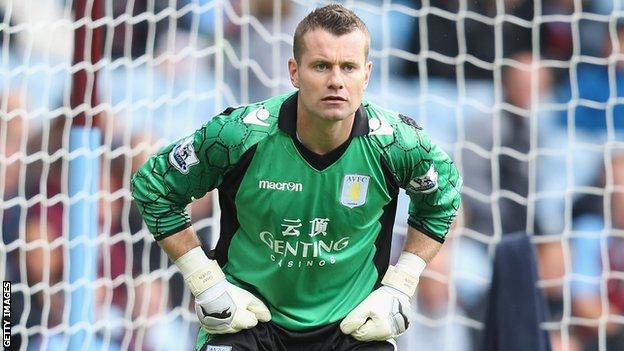 Middlesbrough goalkeeper Shay Given has expressed his joy at ending a 10-month exile from first-team football.

The 37-year-old Aston Villa last week, and made his 600th club appearance in on Saturday.

"I am just so happy to be back playing matches again," he told BBC Tees.

"I was desperate to come out on loan once I was given a chance. The buzz of the crowd, the excitement leading up to the game - you just miss that so much."

Given has been capped 125 times by the Republic of Ireland during a 20-year professional career.

He after the 2012 European Championships, and since then has played just 10 club matches.

By turning out for the Teessiders, he became only the sixth player to have represented Newcastle, Sunderland and Middlesbrough, after Joseph Blackett, William Agnew, Tommy Urwin, Stan Anderson and Alan Foggon - and the first to do so since 1976, when Foggon made his debut for the Black Cats.

Given's clean sheet on his Boro debut ended a 12-match run without one, stretching back to June 2012 when Ireland drew 0-0 with Hungary.

"It's great to be back in the North East having spent so much of my career here," he remarked. "It was an easy decision and I'm grateful to both Villa and Boro for making it happen.

"To keep a clean sheet and pick up three points on my debut was the icing on the cake.

"I know I've been brought in because Jason Steele is suspended for three games [after his and he's a top keeper so I don't know if I'll be here longer than the initial month."