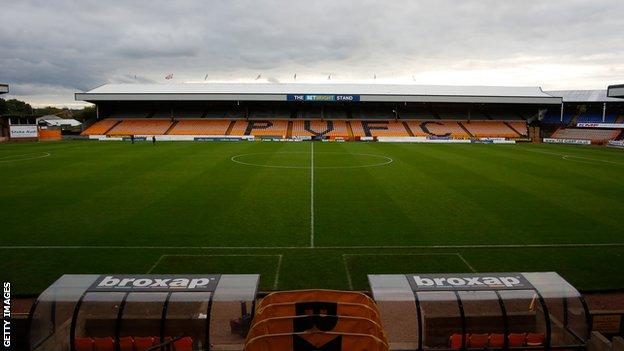 Port Vale goalkeeper Sam Johnson is vowing not to let his successful league debut distract him from making the most of his opportunity at Vale Park.

Johnson, 21, was given a surprise start in Vale's 2-0 win at Walsall after regular keeper Chris Neal injured his wrist in training.

"It's unlucky for Chris but I've finally got the chance to prove myself," Johnson told BBC Radio Stoke.

"I fancied impressing but I tried to keep my feet on the ground."

Johnson's only other appearance for Vale was also against the Saddlers, in a Johnstone's Paint Trophy tie in October 2012.

It's a pretty good ground for me. I played well there last time so it was the same frame of mind really

Vale won that game 6-5 on penalties after a 2-2 draw in normal time, with Johnson scoring the winning spot-kick in the shootout.

And he admitted being part of that victory helped him as Vale recorded their first league win over Walsall since 1947.

"It's a pretty good ground for me. I played well there last time so it was the same frame of mind really," he said.

"Luckily, I had a few early crosses and I went on from there. When I was asking for advice our defence were telling me just to say switched on."

Johnson is now set for an extended run in the first team, with Neal set to be out for a number of a weeks with a suspected fractured wrist.

"I'm going to stay in the same frame of mind," he added. "I need to stay switched on and hopefully keep the form going and keep myself in the frame."