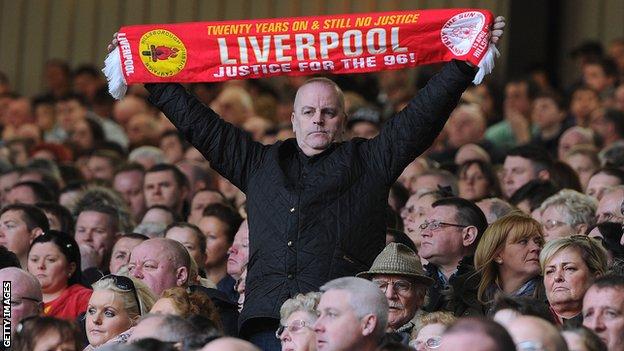 Celtic have asked to try it, Yeovil Town are OK to keep doing it, Cardiff City are turning a blind eye to it and a third of the 80,000-strong crowd at Borussia Dortmund would not dream of doing it any other way.

Standing up to watch football does not sound like a particularly revolutionary act, but a quarter of a century of anger, distrust and fear has turned it into one of the national game's most divisive issues.

Appalled by the horrors of Hillsborough, and ashamed at the state of so many grounds, professional football did not put up much of an argument when Margaret Thatcher's government responded to the tragedy by banning standing areas.

Even when this ban was later diluted to just the top two divisions in England and Wales, any nostalgia for football's most famous terraces was crowded out by the bottom line of greater ticket revenues.

A consensus soon formed around the idea that all-seater stadia were easier to police, safer and more in line with what modern "consumers" wanted - the rising attendances, increased turnover and more diverse fan-base was the proof.

So why do nine out of 10 football fans, in almost every survey, say they would like the choice to stand?

Why are more clubs wondering if bringing back standing areas could help boost the atmosphere at games, as well as improving relations with those annoyed at being told what they cannot do and struggling to keep up with the game's gentrification?

And why are so many experts coming around to the idea that bolting plastic seats to a concrete terrace does not have much impact on a human being's behaviour, or even the likelihood of injury?

"The Hillsborough Independent Panel's report (in 2012) changed everything," says Dr Geoff Pearson, an expert on the policing of football crowds at the University of Liverpool.

"In many ways it didn't tell us anything we didn't already know from (Lord Justice) Taylor's 1990 report [into the disaster] but it confirmed that the reaction to Hillsborough was hijacked to bring in crowd-management and public order measures.

"People were so shocked by the poor quality of most grounds they just didn't think standing could be done safely any more. We now know that's not true. Even Taylor didn't blame terracing."

The centrality of what happened on 15 April, 1989, to today's debate goes both ways, though.

Steve Rotheram, the MP for Liverpool Walton, speaks for many on Merseyside when he says "safe-standing is an oxymoron", and suggests those 96 lives would not have been lost if there were seats in the Leppings Lane Stand that day.

The emotions are still so raw at Anfield that Liverpool were the only Premier League club to tell a Mail on Sunday survey last month that they could not countenance any move to bring back standing.

Rotheram, a Liverpool fan who swapped his Leppings Lane ticket for a seat shortly before kick-off, believes some people romanticise the days when 25,000 fans stood on The Kop - "grounds are less threatening now" - and points out that any notion of markedly cheaper tickets for standing sections is fanciful.

"The rising cost of tickets was something Taylor didn't predict," he adds. "If prices had risen on a par with inflation they'd be £16 now, not £40.

Rotheram is right about a return to standing areas not being the panacea to rocketing prices that many yearn for - most British stadia have been designed, or redesigned, with a capacity in mind, and the concourses, exits and gangways cannot accommodate a significant hike in fans.

But the cost of tickets is not the only thing Taylor did not see coming. He thought fans would get used to sitting down.

"The people I call the 'carnival fans', those who create most of the atmosphere, have never got used to sitting," says Pearson.

"The authorities have simply lost the battle, and blind eyes are being turned around the country every weekend, particularly in away ends."

Pearson is also right. Many fans cannot understand why clubs below the Championship can legally provide standing areas, and even promoted clubs, such as Yeovil Town, are given two years to go all-seater. If safety is the primary concern, surely this should happen immediately.

Then there is the apparent contradiction of allowing fans to stand at horse racing or rugby. This is an anomaly Bristol Sport, the owner of Bristol City FC and Bristol Rugby Club, might be ready to test with its new plans for a renovated Ashton Gate with two standing sections.

And finally you have perhaps the most glaring example of the chasm that is growing between the British authorities' view of how football should be consumed, and the way many fans would like to consume it: the Bundesliga.

Profitable, successful and suddenly fashionable, the German league has become the Premier League's bête noire. What it lacks in TV contracts, it compensates with noisy fans, who are closely engaged with their clubs. It is why an estimated 1,000 Brits travel to Dortmund every fortnight to experience the Westfalenstadion's "Yellow Wall", the 25,000-capacity southern terrace.

Unlike most of the rest of Europe, German clubs resisted the move to all-seaters, and in recent years many of them have upgraded their terraces with "rail seats". These are metal seats that can be flipped up, and locked in place, providing space to stand behind a waist-high rail that runs along the back of the row in front. Every "seat" is linked to a ticket number, and can be flipped down to meet Uefa rules for European games.

Bringing rail seating here has become a crusade for Jon Darch. For the last two years, the Bristol City fan has taken his "Safe Standing Roadshow" to grounds around the country.

Darch, who admits to being sponsored by a manufacturer of rail seats, says they are "patently safe" and "tick every box" for any club considering a return to standing.

Celtic are just one club Darch has visited, but the Scottish champions have gone one step further than everybody else by formally applying for permission to trial 2,000 rail seats at Celtic Park, with no increase in overall capacity.

"We feel there is a new vibrancy in football that has come from Europe and is now in the UK," said Celtic chief executive Peter Lawwell in September.

"The safest way to manage that is through safe-standing. These are new systems that are extremely safe, and we are very keen to explore that at Celtic Park."

With Scottish clubs not being bound by the all-seater requirements of the 1989 Football Spectators Act, and the Scottish Professional Football League dropping its opposition to standing in 2011, hopes had been high that Glasgow City Council's safety advisory group would back Celtic's plan.

But a spokesman for the council says talks are "at an extremely early stage", and points out "this would be a major policy shift". Just how major a shift it would be is clear from the response of perhaps the group's most persuasive voice, Police Scotland.

"We are not convinced by safe-standing and do not support its introduction," says assistant chief constable Bernard Higgins.

"If, however, the local authority and safety committee grant permission, we will work with the club and police it accordingly."

Police opposition is probably the biggest obstacle the safe-standing campaign faces. But even here the picture is blurred.

Our view is that seating is generally safer, more comfortable and enables better crowd management

The Football Supporters' Federation's safe-standing co-ordinator Peter Daykin says representatives from the Association of Chief Police Officers have told his organisation they were willing to put aside their historic opposition to standing and start a dialogue with fans.

According to Daykin, match-day commanders increasingly believe that standing sections could reduce tensions between those fans who want to stand and the stewards tasked with making them sit.

"The objections now tend not to be about safety - we see from Germany, Norway, the US and Leagues One and Two that people stand safely week in, week out - but have moved to standing as the potential cause of crowd disorder," he adds.

"We don't believe there is any evidence to link the two, but we've always asked for an evidence-led debate and not a law based on speculation. That's why we want permission to hold a small number of trials in advance of any change in the existing rules."

But just to emphasise that nothing is simple in this debate, there is even disagreement about how any change to the status quo might happen.

The law insists upon all-seater stadia, but it is not against the law for fans not to use those seats; that is a breach of contract between fan and club, based on the ground regulations. Compliance with these regulations is the remit of the Sports Grounds Safety Authority (SGSA), which took on this role when the Football Licensing Authority (FLA) was wound up in 2011.

"The legalities of safe-standing can be debated between solicitors but our understanding is that primary legislation is not required," says Daykin.

"The Secretary of State (for Culture, Media and Sport) can direct the SGSA to drop the all-seat requirement from the licence it issues. It's not an outrageous proposal - League One and League Two clubs are already exempt."

Some hope the abolition of the FLA, which was vehemently against standing, might be the key that unlocks the door to Bundesliga-style terraces. This might prove to be the case in the future - the rhetoric is certainly less dogmatic than it used to be - but for now the regulator's opposition to standing remains.

"We recognise there are some fans who may prefer to stand, and we're happy to engage in an informed and constructive debate, but our view is that seating is generally safer, more comfortable and enables better crowd management," says SGSA chief executive Ruth Shaw.

"It can also help to create a more inclusive and diverse environment."

Shaw's reference to crowd management is interesting given the current focus on stopping fans from bringing pyrotechnics into games, as well as the damage caused by some Celtic fans at Motherwell's Fir Park last weekend. It will be some time before the SGSA, most police and many politicians are convinced that identifying wrongdoers in a standing area is as easy as it is in a seated section, regardless of the improvements in CCTV.

So what we are left with is an impasse, with many in football stuck in a No Man's Land between the opposing camps, frightened to move, but scared at being left behind.

It is telling that while 19 of 20 Premier League clubs have said they would like to talk about a return to standing, none has raised it at a Premier League shareholders meeting. Even Cardiff City, who have spent most of this year moving persistent standers to the Canton Stand and letting them get on with it, have not tried. The last meeting was a fortnight ago.

In the meantime, stewards up and down the land will continue to look for common-sense solutions to the problem of being asked to enforce an unpopular law, and many fans will pay for a seat they do not want.