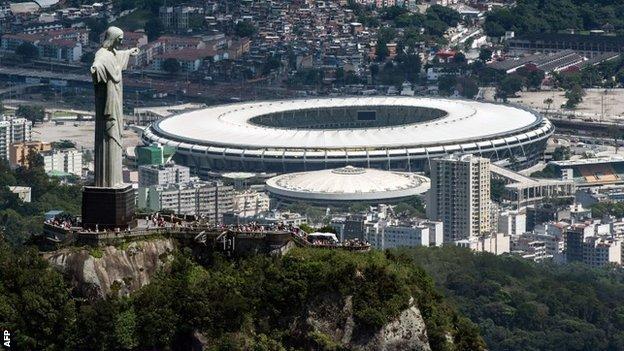 With the World Cup draw over and the finals just six months away, what are the big moments to look out for in Brazil?

Will the hosts get the tournament up and running in their opener on 12 June?

Can Lionel Messi or Cristiano Ronaldo finally deliver on the biggest stage of all? And how will England cope with their trip into the jungle?

BBC Sport looks at five reasons to be excited about the finals.

Sixty-four years after Brazil last staged the World Cup, 65,000 fans will scream the hosts on as Luiz Felipe Scolari's side open the 2014 tournament against Croatia in Sao Paulo on Thursday, 12 June.

The five-time winners are the bookmakers' favourites to make it six titles on home soil and face a Croatia side who only qualified by beating Iceland in the play-offs.

Expectations in Brazil have been on the rise since Scolari guided his side to victory in last summer's Confederations Cup, when Barcelona's £48m forward Neymar impressed on the way to a 3-0 final win over defending World Cup winners Spain.

Chelsea trio Oscar, David Luiz and Ramires could all feature for the Selecao, as could Tottenham midfielder Paulinho.

Familiar faces which could be in the Croatia line-up include former Tottenham midfielder Luka Modric, Everton striker Nikica Jelavic and Southampton centre-back Dejan Lovren. Croatia finished third in their first World Cup finals in 1998 but have won just one match since.

The two sides met in their opening group game in Germany in 2006 - when AC Milan forward Kaka scored the only goal.

Spain have won their last three major tournaments and head to Brazil hoping to become the first European team to win a World Cup on South American soil.

But manager Vicente Del Bosque saw his team handed arguably the toughest of the groups in Group B, as Spain were placed up against 2010 finalists Netherlands and Chile.

The Dutch won nine of 10 qualifying games and still have the core of the side which reached the final in South Africa, with Manchester United striker Robin van Persie and Bayern Munich forward Arjen Robben in lethal form for their clubs.

Chile, meanwhile, pushed Spain all the way for their 2-1 win in the group stage four years ago and beat England comfortably at Wembley last month.

The champions' task is made harder by the fact that the runners-up in their group are likely to face Brazil in the last 16.

England were hoping not to visit the Amazon jungle during their time in Brazil, but instead they will have to face four-times winner Italy in their opening match in Manaus in sweltering temperatures of 30C.

As if that task was not daunting enough, Roy Hodgson's boys have been told they are not welcome in Manaus because of Hodgson's comments before the draw, where he stated a trip north would not be ideal. England should probably prepare for a fiery welcome to the jungle.

However, England's preparations for the tournament are expected to include two matches in the United States, where Hodgson will base his team in the humidity of Miami.

But with Italy experiencing the heat of Brazil during last summer's Confederations Cup, England could be left sweating on progress from Group D.

If the draw followed the same procedures as in 2006, France, as the lowest-ranked team to qualify from Europe, would have been placed in a group with one of the seeded teams from South America. Instead, the format for the draw was changed and it was Italy who ended up in with Uruguay and England.

The French? They will surely fancy their chances of qualifying from a group containing Switzerland, Ecuador and Honduras. "It's true, I won't hide it from you, it could have been tougher," said France coach Didier Deschamps.

The 1998 champions finished bottom of their group in the last World Cup but with a potential second-round tie against either Nigeria or Bosnia-Hercegovina on the cards, Deschamps' men could be dark horses for a shot in Brazil.

Messi and Ronaldo go for greatness

Alongside Cristiano Ronaldo, he has dominated Spanish and European football for the last four seasons.

But a World Cup title eludes the duo, and their individual records are poor. Messi has scored just once in a World Cup finals match for Argentina - the sixth in a 6-0 thrashing of Serbia in Germany - while Portugal captain Ronaldo can only claim goals against Iran and North Korea.

Maradona carried Argentina to the trophy in 1986 while Pele won three titles with Brazil and a similar display from the modern game's two leading men may finally end the argument over who is the better player.

Over the past few years both men have shone on the international stage. Ronaldo was at his brilliant best during Portugal's run to the last four in Euro 2012 and scored a hat-trick in their play-off win in Sweden which booked their place in Brazil.

Messi scored last summer and has finally brought his club form to Argentina, with his record now an impressive 37 goals in 83 caps.

With Messi facing Iran, Bosnia and Nigeria in Group F, and Ronaldo's Portugal up against Germany, Ghana and the United States in Group G, both players will hope that they can lead their sides to glory next summer.