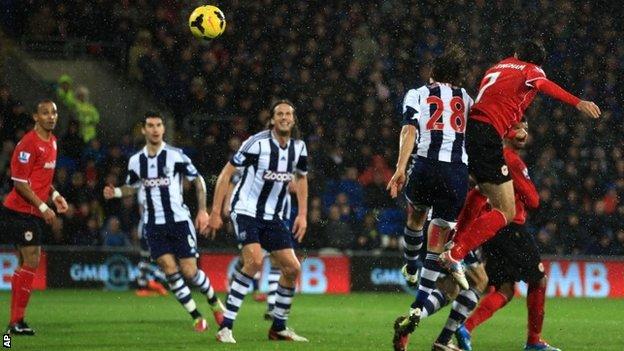 Peter Whittingham's goal moved Cardiff four points clear of the bottom three in what proved to be Steve Clarke's last match in charge of West Brom.

Neither team shone but Cardiff had the better of a poor first half with defender Steven Caulker going close.

Whittingham headed home the winner to condemn the Baggies to a fourth defeat in a row and end Clarke's tenure.

The defeat means the Baggies' season continues on a downward spiral and a team that ended last season in eighth are now just two points above the bottom three in 16th place.

End of a drought

Prior to the match, Clarke said it was too early to describe his team as being in a relegation dogfight, but the visitors put in a below-par performance against a side that has also struggled of late.

Suggestions this match was a "must-win" for the Welsh team, however, were dismissed by Cardiff manager Malky Mackay beforehand.

But as the lacklustre game progressed it became clear that this was a fixture neither team wanted to lose, and understandably so considering both clubs had gone five games without a win leading up to this encounter

Cardiff edged a scrappy and dull first half, although it was perhaps unsurprising that a team who had not scored in their previous three Premier League matches lacked a killer instinct in the final third.

The hosts bombarded Boaz Myhill's goal in the opening 10 minutes, with an Odemwingie free-kick forcing a fine save from the Wales goalkeeper and Medel going close from distance.

Only fine defending from Jonas Olsson prevented Odemwingie - playing against his former team for the first time since his summer move from The Hawthorns - connecting with a Craig Noone cross when the Nigerian international was just yards from goal.

The best chance of the half, though, fell to defender Caulker who should have done better than volleying a Whittingham corner wide when just eight yards from goal.

West Brom, a shadow of the team which secured a memorable victory at Old Trafford in September, lacked guile and confidence. Indeed, they did not even have a shot on target to comfort them as they left the pitch for the break.

But despite their dire form, the visitors nearly snatched the lead early in the second half only for club-record signing Medel to stand in the way of McAuley's side-footed effort.

The Baggies were slowly gathering momentum when the hosts struck for the opener. The impressive Noone found Whittingham on the far post and the midfielder headed into the corner for his third goal in as many appearances against the Baggies.

City went in search of a second as Jordon Mutch went fractionally wide after good work by Odemwingie.

But the visitors had opportunities to equalise with a dangerous Chris Brunt free-kick evading Shane Long and Saido Berahino as well as the Cardiff defenders, and then Long drew the best out of goalkeeper David Marshall.

West Brom manager Steve Clarke, speaking before he was sacked: "It's been a frustrating couple of weeks. I don't think the performance was so bad that we deserved to lose the game but at the moment that's the run we're in.

"Over the course of the game we created enough chances to score. At the moment, when we defend well, like we did today, we still concede the goal which came from nowhere, really."

Cardiff City boss Malky Mackay: "It was an important win for us against a team who are around about us in the league.

"A clean sheet and a real good performance. I said to the boys at half-time to just have patience and grind them down, and I think we deserve it on the balance of play."