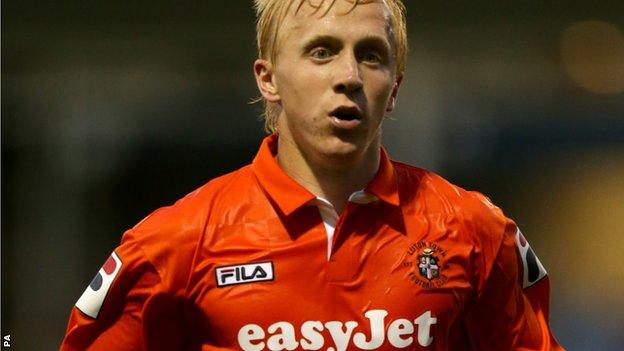 Luton's late equaliser tightened their grip on a return to League Two and kept second-placed Cambridge United at bay.

Luton, limited to long-distance efforts, looked to be heading for a first defeat in 27 league games.

But Mark Cullen guided in Cameron McGeehan's knockdown to maintain his side's lead at the top at 15 points.

The U's have a game in hand on their rivals, but they would now have to produce a miraculous end-of-season run-in if they were to surpass the leaders and continue Luton's five-year exile from the Football League.

Cambridge boss Richard Money was one of four managers to try to take the Hatters back up, and while he may have to settle for the play-offs with his U's side, he can be proud of how they restricted his former club.

Elliott's header past Tyler was the first time the Hatters defence had been breached in 563 minutes of league football, but John Still's men rallied in the closing minutes as Cullen put in their only meaningful chance.

"I think the most important thing for us tonight was to show some progress.

"We have to get back to where we were before Christmas. We know we have been very inconsistent, particularly in the league.

"We need to finish this season strongly and go into the play-offs hopefully with some momentum and form.

"That was a big step in the right direction. I thought the players were terrific tonight."

"We said before the game that without any shadow of a doubt this was going to be a massive, massive game, they were going to give it everything they'd got.

"Both defences were on top, there were, I think, three or four shots on target.

"We never stop, we never give up. I think in the last 10, 15 minutes we got our tempo to the game, which we hadn't been able to get and that's when we scored.

"All former Football League clubs are strong. They are a strong club, they are well run, they've got good players. We've got a very valuable point."