Thomas Muller scored the first hat-trick of the 2014 World Cup as Germany produced a ruthless attacking display to destroy 10-man Portugal and open their World Cup campaign in style.

The 24-year-old, who scored five goals to win the Golden Boot in South Africa four years ago, took his World Cup total to eight with a sensational performance.

The Bayern Munich forward dispatched an early penalty, drilled home Germany's third and tapped in a fourth, with centre-back Mats Hummels heading the second before going off with a knee injury.

'It's all gone wrong for Portugal'

"Germany have played so patient. Sometimes in our country we rush it because of the crowd and the excitement but the Germans have played to their tempo. They look really solid at the back as well.

"Portugal's situation is similar to Spain. But if they win their two games, they will get through.

"They've got two winnable games and they've just got to make sure they win them."

Portugal lost defender Pepe to a needless red card at 2-0 after he appeared to headbutt Muller, and Paulo Bento's men could not recover as Cristiano Ronaldo had little chance to impress.

The result was wrapped up with plenty of time to spare, putting Germany in pole position to dominate Group G and fuelling hopes of a first World Cup triumph since 1990.

Although Joachim Low's men had won each of the past three meetings between these sides, including at the same stage of Euro 2012, Portugal made the better start, with Ronaldo to the fore.

The Real Madrid forward was troubled by knee and thigh problems in the build-up, but showed no sign of discomfort. His early break set up Hugo Almeida for a weak shot, before the two-time Ballon d'Or winner beat Per Mertesacker and drew an alert save from Manuel Neuer.

That scare seemed to spark Germany into life. Sami Khedira missed an open goal after a poor clearance by goalkeeper Rui Patricio, but the opener would soon arrive.

Muller, Mesut Ozil and Mario Gotze were causing Portugal all manner of problems and, when the latter was hauled down after forcing his way past Joao Pereira, referee Milorad Mazic pointed to the spot. The penalty was tucked into the bottom corner by Muller. 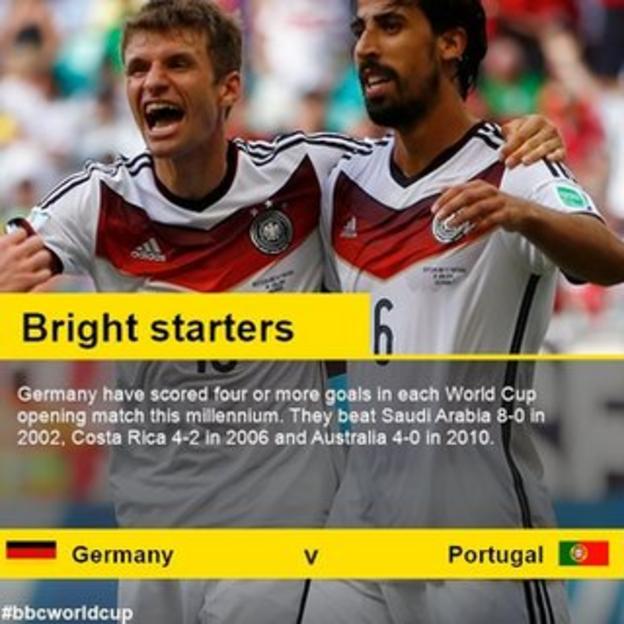 That settled Germany into a rhythm, executing their 4-2-1-2-1 formation far better than Portugal to look solid at the back and capable of threatening every time they came forward.

Nani drilled a rare Portugal effort narrowly over the bar, but Gotze almost doubled the lead with a shot that deflected wide. Then, following Toni Kroos's resultant corner, Hummels did burnish the advantage, exploiting Portugal's sloppy zonal marking to head powerfully past Patricio.

Portugal briefly rallied. Fabio Coentrao inexplicably tried to cross for Ronaldo when he should have shot and Eder - on the the injured Almeida - headed over.

But any hopes they harboured of a comeback were dashed when Muller fell after what looked like a flailing arm from Pepe, who reacted by bending down and nudging his head against that of the grounded German.

Portugal coach Bento seemed appalled at the Real Madrid defender's actions, and Portugal's afternoon deteriorated further when Bruno Alves struck a clearance straight into the body of Muller, who reacted sharply to lash a shot under Patricio.

The contrast on the two benches as the half-time whistle blew was stark - all smiles and high-fives among the Germans, bowed heads and dejection among the Portuguese - and the interval did little to change things.

The Muller-Ozil-Gotze axis continued to wreak havoc and they combined again as Gotze slipped Ozil though, but the Arsenal playmaker was denied by Patricio and Muller headed the rebound over.

Facts from the match

Ozil's disappointment at being replaced by Chelsea's Andre Schurrle epitomised how much Germany were enjoying the game, and Gotze went close again after a stunning counter-attack involving Muller and Schurrle.

The only downside for Low's side was a knee injury to Hummels but Portugal had plenty to ponder, not least the irate Ronaldo, who was furious not to earn a penalty for Benedikt Hoewedes's challenge on Eder.

Their day would get worse still, though, when Muller completed the rout after Schurrle's drive was repelled. It was the first time Portugal had conceded four goals in a World Cup match.

Ronaldo almost had the final word with a blistering free-kick, but Neuer proved his equal.

"I've been involved in the last three major tournaments so I'm used to the pressure.

"But to score three goals in one game - that's pretty amazing, and the goals just got better and better. It's fantastic, but the merit also goes to the rest of the team.

"I just felt a blow from Pepe's fist, but I can't really remember much of what happened after."