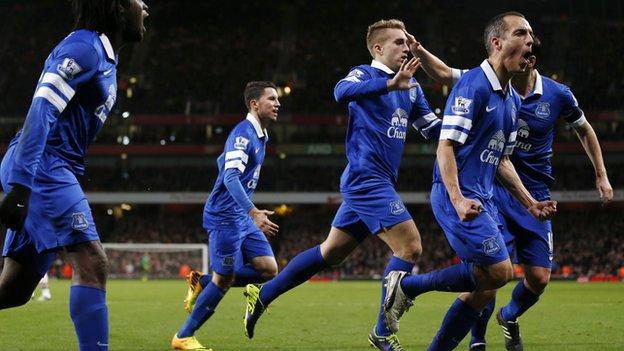 Everton manager Roberto Martinez has praised the "special touch" of Gerard Deulofeu and revealed he could extend the Spaniard's loan deal.

Deulofeu, 19, joined on a season-long loan from Barcelona in July and scored a late equaliser in his side's 1-1 draw at Arsenal at the Emirates Stadium.

"We have an agreement to extend the loan for an extra year if Barcelona don't need Deulofeu," said Martinez.

"He has incredible pace and I've never seen a player so quick with the ball."

Deulofeu, an attacking midfielder, helped Spain's Under-19s become European champions in 2012 and was described as a "diamond of Spanish football" by Martinez upon his arrival at Goodison Park.

Who is Gerard Deulofeu?

His strike to deny Arsenal all three points and extend Everton's unbeaten run to eight games was his third goal in 13 games for the Toffees.

"You've got certain players with raw talent who can create from nothing with a special touch and he is one of them," added Martinez, 40, whose side are fifth in the Premier League.

"I always thought he'd take until February to learn how to deal with the league but he's surprised me.

"He's very arrogant in the right way and today's finish is exactly what he deserves."

Deulofeu was one of five players aged 23 or under to feature for Everton against Arsene Wenger's side and Martinez said after the match he feels he has the "perfect blend" of experience in his squad.

"In Ross Barkley I see bits of Michael Ballack, bits of Gazza," added Martinez, who was relegated as Wigan manager on his last visit to the Emirates Stadium.

"The manager of England needs to decide what role Ross has, if any, but we need to give him another 50 starts at least to see his full influence. He could give us something unique as a nation.

"He has great balance with both feet, he's strong, powerful, has awareness and you can compare him against the young Brazilian, Dutch and Spanish players."