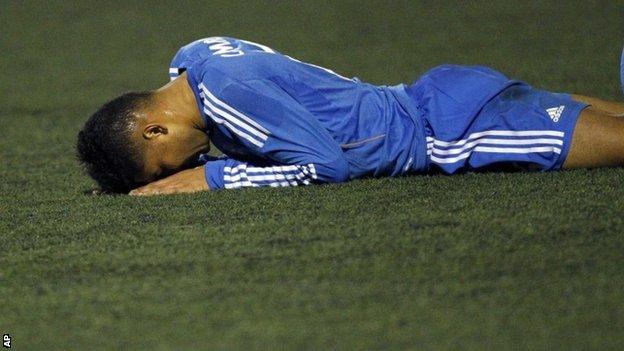 Real Madrid boss Carlo Ancelotti says he is not concerned by a goalless draw at minnows Olimpic de Xativa in the the Copa del Rey fourth round first leg.

Cristiano Ronaldo was suspended and Gareth Bale out with flu as Real failed to break down the team lying ninth in the third-tier Segunda B Group 3.

"There is no need to worry about not having scored," Ancelotti said.

Who are Olimpic de Xativa?

"This team has no problem scoring, we have scored a lot of them. We defended well, playing with a good balance."

He added: "The artificial turf did not help us because we are not used to playing on it. We struggled in possession, but I think we had three clear chances to score. We did not have a good match but it was not a bad one.

"The match was difficult. There were a lot of throw-ins and a lot of long balls, and we tried to play. But it was not easy on this field. It was a difficult match."

Olimpic de Xativa, from Valencia, have spent most of their history in the fourth tier and have never played above their current level.

The second leg, for which Ronaldo is again suspended having been sent off in last season's Copa del Rey final defeat by Atletico Madrid, will be played at the Bernabeu on Wednesday, 18 December.

Real, 18-times winners of the Spanish cup, enter the competition at the fourth-round stage.