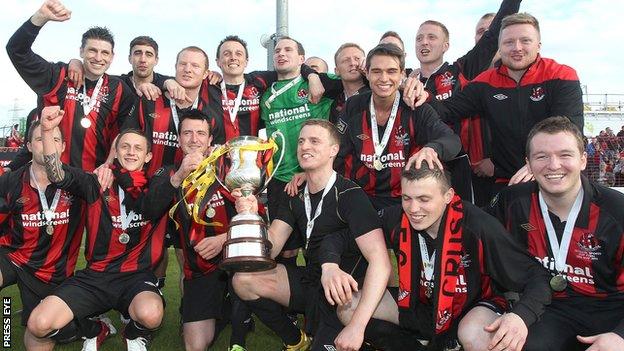 Irish Premiership clubs Cliftonville and Linfield have decided not to enter the 2014 Setanta Cup competition.

However, the All-Ireland event is going ahead with Crusaders, Glentoran, Coleraine and Ballinamallard United representing the Irish League.

Linfield, inaugural winners in 2005, said reduced prize money and scheduling of matches led to their decision.

"Our heavy schedule began with the Champions League in July, and we have decided not to take up the invitation this season," a statement read.

"We enjoyed being part or the tournament in previous years and do not rule out participation in the future."

Linfield said: "With a much reduced prize fund available to competing clubs, and also taking into account the considerable difficulties faced by our supporters travelling to attend games, the Board of Directors has taken the decision not to enter the competition."

The loss of two leading teams from Northern Ireland's top flight, will lead to speculation about the future of the cross-border competition.

However, Crusaders have said they will take part, while two other Irish League clubs, Coleraine and Ballinamallard United have also accepted invitations to enter.

And on Monday it was announced that Setanta Sports were renewing their sponsorship for a further three years to 2016.

The draw for the 2014 competition is to take place on Wednesday at the Aviva Stadium in Dublin.

In the eight years of the Setanta Cup, Linfield and Crusaders are the only Irish League clubs to have won the trophy.