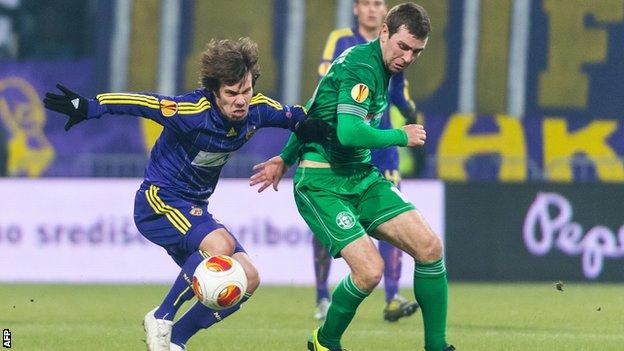 James McArthur was pleased to see Wigan revert to a more fluid passing style of play, despite the Latics exiting the Europa League against NK Maribor.

ended Wigan's participation in the competition.

It was the Latics' first game under new boss Uwe Rosler, who promised a after being

"We got the ball down and tried to move it like we used to," midfielder McArthur told BBC Radio Manchester.

"We played some very good stuff and we were very patient with the ball. Even when we went down to 10 men [following Chris McCann's red card] we were still trying to pass the ball.

"That shows the belief we've got in each other and the manager's belief in us - that we want to keep passing the ball even though they've got an extra man. That can only help us in the future."

FA Cup holders Wigan, who would have qualified from Group D with a victory on Thursday, took the lead through a Jordi Gomez penalty before half-time.

But McCann was sent off for a second yellow card after handling in the area a minute later and the hosts went on to claim a win that sent them through to the last 32.

Scotland international McArthur, 26, continued: "Them going through has made it worse. Rubin Kazan won [against Zulte Waregem] and if we'd have won, we'd have been through.

"But it's not a time to be disappointed. We need to move on fast and look forward to the game on Sunday."

Rosler was critical of the decision to dismiss McCann, adding: "I didn't have a good feeling when I saw the referee at the start of the game and I was right.

"The penalty situation was not a penalty for me. I'm not sure what the player [McCann] can do different from such a short distance and to send him off - I was gobsmacked."