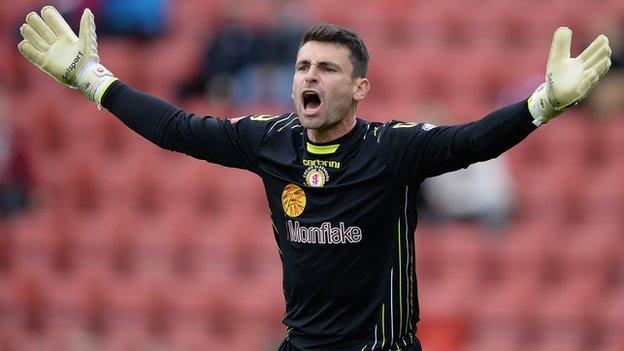 Injured Crewe Alexandra goalkeeper Steve Phillips is considering retirement at the end of the season.

Phillips, 35, who has played more than 600 games during his career, has not played since October as he recovers from a torn muscle in his shoulder.

"I'm out of contract and sort of thinking about next year," he told BBC Radio Stoke. "Do I still continue to play at a professional level?

"It might be that I get back and I can be one of the goalies here next year."

The former Bristol City and Bristol Rovers keeper, who is also the club's goalkeeping coach, is determined to win back his place.

"I know if I'm fit I'll give anyone a run for their money," he said. "But it might be that I stay and be goalkeeper coach full-time.

"Do I coach and not play at all? Or do I coach and still play on Saturday for someone non-league at a decent standard?

Phillips made his 600th career appearance as a professional in September, also playing his 100th league game for Crewe.

On-loan Fulham goalkeeper Neil Etheridge has been Davis's number one since his arrival in November, but was this week recalled by his parent club to recover from a thigh injury.

Either Alan Martin or Ben Garratt, who have both featured for Crewe this season, will take the gloves while both Phillips and Etheridge are sidelined.