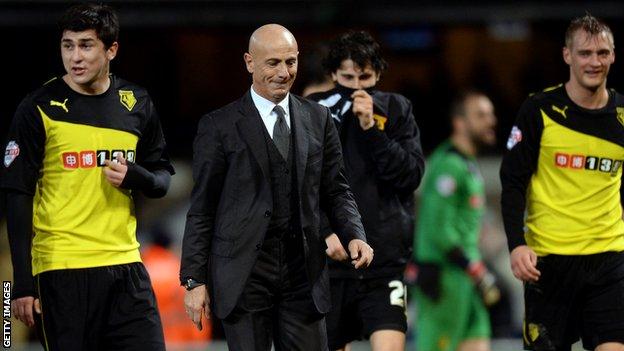 The hosts took a controversial lead through David McGoldrick's penalty after Gabriele Angella was adjudged to have handled Frank Nouble's cross.

But Sannino, who became Watford's new head coach on Wednesday, saw his side level with nine minutes remaining.

Watford have now gone 10 games without a victory. Their last win came on 5 October when they won 2-1 at Huddersfield.

However, Ipswich nearly grabbed a late winner when Luke Hyam headed against the crossbar after McGoldrick's shot had been parried by Watford goalkeeper Manuel Almunia.

Sannino took charge at Watford after former boss Gianfranco Zola resigned on Monday following a run of just one win in 10 matches.

The hosts went ahead through McGoldrick's 73rd-minute penalty, his ninth goal of the season, but their advantage only lasted eight minutes before Deeney's leveller.

Watford finished third in the Championship last season and are now 14th in the table, while Ipswich, unbeaten in five games, are ninth, three points off a play-off position.

"I will take a point as Watford are a good side. Last year they came here and absolutely murdered us. So it shows how far we have come.

"Overall, maybe they deserved a point because we weren't that dominant.

"I like him [Sannino], I like his passion on the side and he had a smile on his face."

"It was a dream for me to land in England and this game was 90 minutes of my life that I was always dreaming about.

"I have only been here for two days and I am not a magician. I knew the kind of football in the Championship but my first thoughts are with Gianfranco Zola.

"He did an amazing job last season and this was his team. I was able to show my passion on the touchline and I thought, tactics-wise, we were good, but there is a lot of work to do."