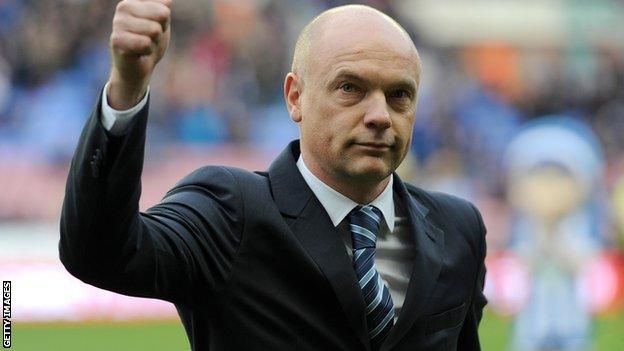 Midfielder Chris McCann gave the Latics an early lead when he gathered a loose ball and beat keeper Alex McCarthy.

Nick Powell then added a second with a low shot after Reading central defender Alex Pearce misread a punt downfield.

Russian forward Pavel Pogrebnyak pulled one back for the Royals when his looping header arced in over Oman goalkeeper Ali Al-Habsi.

The result moved Wigan up to 12th in the Championship table. Reading, on the other hand, slip down to sixth after a second defeat in seven games, with a tough match at third-placed Leicester coming up.

The Lancashire side went in front in the 10th minute when James McArthur released James McClean on the left. His attempted cross was blocked, but McCann collected and kept his head to guide the ball past the stranded McCarthy.

It got worse two minutes later, when defender Pearce inexplicably allowed a hopeful punt to evade him and Powell scampered through to beat McCarthy with a low shot.

Reading fought back with Pogrebnyak forcing Al-Habsi into a fine save at his near post, before Kaspars Gorkss headed over from a Danny Guthrie corner.

The Latics held firm until the 68th minute when Pogrebnyak scored with brilliantly guided header.

Wigan were rattled as Reading poured forward for the equaliser - Guthrie went close from a free-kick, Pogrebnyak narrowly failed to reach an Adam Le Fondre cross-shot before the Russian was denied by the post.

The visitors, however, held on for a deserved win.

"I came here to make the play-offs but, for the moment, I just focus on the next game.

"We have the possibility, with a good run, to sneak into the play-offs.

"All the teams I have had always have a strong end to the season. I think that will happen here as well. I'm confident that it is achievable.

"We've started the last few games in similar fashion. Reading had massive problems, lost their confidence and had the crowd on their backs."

"That poor start cost us dearly.

"We tried to control the game but there was a bit of nervousness. And you just can't legislate for giving away goals like that, they were shocking."