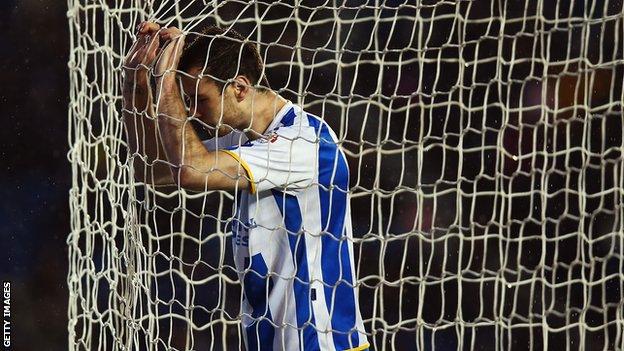 Brighton missed the opportunity to move into the play-off spots with a goalless draw against a determined Huddersfield.

Striker Ashley Barnes went closest to securing a third Championship win in a row for the Seagulls, but wasted two second-half chances.

Huddersfield had been denied a first-half penalty when James Vaughan was fouled during a rare foray forward.

Brighton remain outside the top six after failing to take advantage of their nearest rivals dropping points.

Leeds and Nottingham Forest played out stalemates against Barnsley and Birmingham, while Reading were defeated by Wigan. The results mean Brighton, who have only been beaten once in their last 10 games, are two points off the final play-off spot in eighth.

Huddersfield had been thrashed 4-1 on their last visit to Amex Stadium, and were immediately under pressure as Barnes' header at the near post was scrambled away by Martin Paterson following a Bruno corner.

The clearest chance of the game came on 50 minutes when Barnes shot over when Kemy Agustien's diving header was parried to him by the excellent Alex Smithies. Barnes then headed wide at the far post, before substitute Kazenga LuaLua was denied by Smithies after beating two defenders.

"We are where we deserve to be. We are focused on the next game and you can't think about two or three months after today, we just must control what happens tomorrow.

"We played really well in this game and the only thing we needed was to put the ball in the net. On the positive side we have played well away from home and got some good results.

"Sometimes we play better at home but the results don't show it. We need to do everything to win games and I am happy with the performance: we played really well."

"Brighton is a very difficult place to come and play and there's no doubt we were up against a top team in this division. Along with Derby, they are the form team and having lost 4-1 on our last visit I'm delighted with a point this time.

"It's a great pitch and a great stadium but we did not capitulate. Barnes had a couple of chances for them, but there were not loads of chances in the match, although we tried to make a game of it.

"We are a work in progress and we have got to try to be economical, we've got to try to maximise what we have. There is more to come from the youngsters but I'm pleased with the way it's going."