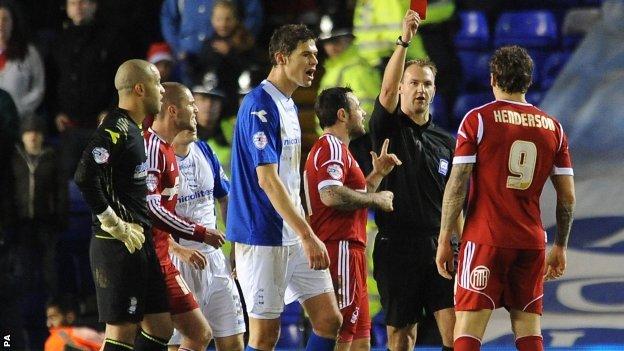 Birmingham City were held to their fourth consecutive home draw by 10-man Nottingham Forest as they remain in the bottom half of the Championship.

Nottingham Forest, who have drawn four of their last five matches, had Darius Henderson sent off late on.

The striker had only been on the field for eight minutes.

Birmingham enjoyed more of the game than Forest but failed to capitalise upon several good chances despite some impressive play by youngsters Jesse Lingard and Oliver Lee.

The hosts went closest to a goal in the opening 20 minutes when Tom Adeyemi's looping header from a Chris Burke corner dropped on the back netting.

And the Blues should have taken the lead when Zigic inexplicably missed Burke's head-high cross from just a few yards in front of goal.

After a bright start start to the second half, the visitors again found themselves under pressure and needed a tackle by Jack Hobbs to cut out the goal scoring threat of Burke.

The game ended on a sour note with Henderson's reckless tackle on Robinson and resulting red card.

"It was a good point. It was always going to be tough but I thought my players gave everything. They were committed and never gave in.

"Some of the football was excellent and their keeper had to make two or three great saves.

"I could not fault the players. They produced a fantastic performance. In the first half Burke and (Paul) Caddis were very impressive.

"It was probably one of our most fluent home performances and Olly Lee had a big say in this display."

"I thought we played a lot of good football. We have to be more clinical and must add more fire power in the next transfer window. That has always been the plan from the very first day.

"I thought it was a very good point. It's the third (consecutive) clean sheet, against a side which has not lost in six games.

"You know you always face a competitive match at Birmingham. They make it difficult for you but great credit to the team. They worked really hard and in the end it was a really good point."