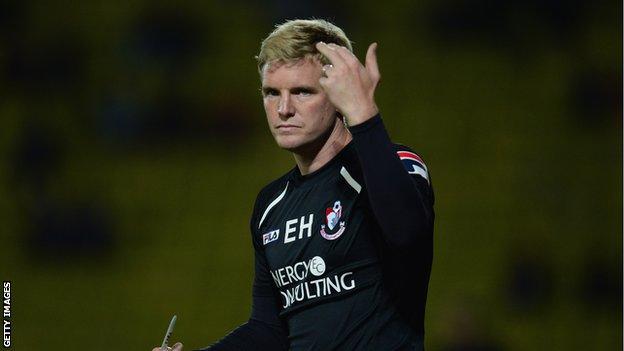 Wednesday caretaker boss Stuart Gray saw his side go 2-0 down before half time as Ritchie struck with a low shot and Grabban scored at the near post.

Jacques Maghoma pulled a goal back for the hosts at the end from close-range after a defensive mix-up.

Bournemouth have been involved in 23 matches so far this season and have yet to be involved in a goalless draw.

The result kept the struggling hosts in 22nd place in the Championship.

The Owls' previous game against Wigan had been abandoned before the hour mark because of a waterlogged pitch, though they had won at Watford last weekend.

They faltered from the start against Bournemouth, falling behind in the 10th minute as Ritchie went unchallenged just outside the area and fired in a low shot which goalkeeper Damian Martinez failed to keep out.

The Cherries went further ahead soon after as Grabban received an excellent pass from Harry Arter and beat the Arsenal loanee from inside the area.

Both sides exchanged chances either side of half-time, before Wednesday began working themselves back into contention. Defender Miguel Llera fired a free-kick over the crossbar from 25 yards, then Maghoma struck after Charlie Daniels failed to clear.

Bournemouth looked the stronger at the death however, and held out to move into 15th place after securing their third away win of the season.

"I think I'll be in charge for the Blackburn game, unless the chairman tells me different.

"It was very disappointing, I thought we started quite well but then sloppy defending has cost us. Suddenly we're chasing the game, it was a similar thing again with poor defending for the second goal.

"We're short of strikers so in the end I had to put Reda [Johnson] down the middle. Hopefully we're going to have Chris Maguire back from his loan [at Coventry City], we're going to recall him on Christmas Day."

"I was delighted in the first half because I thought it was a very good display. We counter-attacked with real quality and pace and Lewis Grabban led the line well, causing problems with his pace and mobility.

"We built on the Reading victory in terms of our performances without getting the results. You do need wins to back it up so today was very important.

"Our priority now is a long overdue home win. Of late, we've failed to turn our dominant performances into victories."