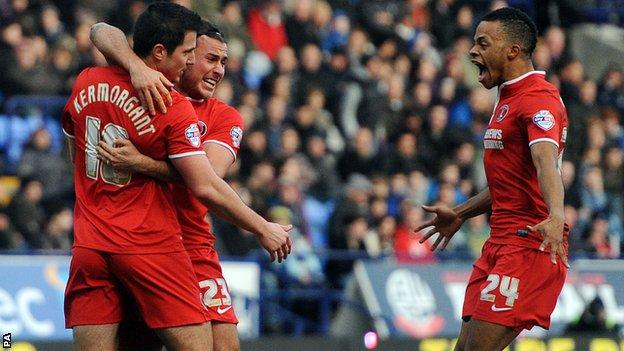 Bolton defender Kevin McNaughton cancelled out Yann Kermorgant's early strike for Charlton in a 1-1 draw that summed up both teams' recent form.

Kermorgant curled in moments after Andrew Lonergan tipped his shot around the post, with McNaughton then finding space to clip into the top corner.

The Addicks are two points above the Championship relegation zone, with Bolton four ahead.

Kermorgant's goal was the first real action of the match and Charlton could have easily made it 2-0, when Lawrie Wilson had space and time at the back post. The midfielder wasted the chance, however, firing wide from six yards.

Chris Eagles impressed for Bolton, creating a slew of opportunities, before setting up McNaughton, who cut onto his right foot and hammered home.

Charlton defender Rhoys Wiggins's volley was tipped over by Lonergan, and Jay Spearing went close for Bolton, before both teams settled for the point.

"It will turn and we've just got to keep believing and sticking to our high performance levels and hard work.

"We've got to win more games at home. We don't need better performances because I think we've been playing well but we've just got to start getting three points.

"Games are running out but I feel that there is still time to do something here and put a run together."

"I knew it would be a tough season for us but we've just got to battle on.

"I'm sure everyone would have liked us to continue from where we were last season, but things will change for us and we've got to remain as positive as we can and things will hopefully turn.

"We've got to dig deep now in the next few games and make sure that we take something positive from those as well."