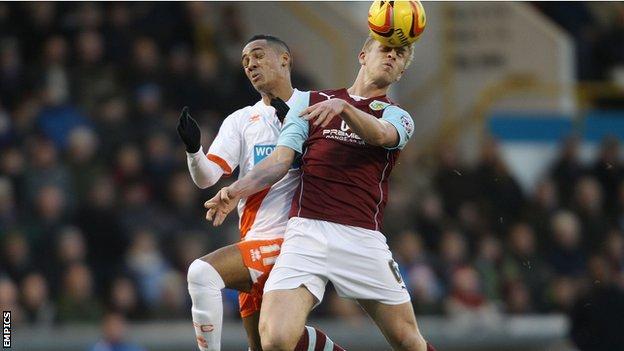 Burnley went top of the Championship with a victory over Lancashire rivals Blackpool.

Danny Ings side-footed home his 17th goal of the season to put the Clarets in front.

But Craig Cathcart, who was an injury doubt after hurting his back picking up his baby, equalised with a close-range header from Thomas Ince's cross.

Scott Arfield scored the winner two minutes after the break with a superb curling shot from the edge of the box.

The Clarets took advantage of QPR losing 1-0 to Leicester to overtake both sides in the table.

Blackpool sort out their discipline

The Tangerines had been shown five red cards in their last two away matches, with three sent off at Yeovil and two at Derby

Burnley came into the game out of form after a run of one win in eight games following a streak of eight victories in a row, while Blackpool were looking to avoid a fourth consecutive defeat.

The hosts took only seven minutes to go ahead with in-form Ings, a reported transfer target for Liverpool, slotting home from 12 yards after a clever ball across the box from David Jones.

Ince almost levelled after beating three Clarets defenders but Jason Shackell's last-ditch tackle denied the winger. They had another chance to equalise when Ince set up Steven Dobbie, who fired wide when he had time to pick his spot.

They did get themselves level when Cathcart headed home Ince's pass, with keeper Tom Heaton narrowly failing to keep it from crossing the line.

And the visitors almost led when Dan Gosling's curling effort was brilliantly kept out of the far corner by a busy Heaton, who also had to deny Steven Davies's long-range shot.

At the other end, Matt Gilks pulled off an equally impressive stop to keep out Sam Vokes's header from Michael Kightly's cross.

But his save proved to be in vain as Arfield fired home a wonderful effort from 18 yards.

The Scottish midfielder could have had another later in the second half but his effort hit the angle of bar and post.

"I thought we delivered another very good performance. We looked solid defensively, had good energy and we always looked a threat going forward.

"We scored two fantastic goals and showed some excellent quality. It is important to find different ways of winning and then deliver them.

"I am really pleased with the attitude of the side. We hurt Blackpool in a lot of different ways.

"We fought and we competed and Scott Arfield has scored a sublime goal."

"We are killing ourselves and there isn't much in this league between any of the teams.

"We didn't get the basics right after the break after an outstanding first half.

"We are not going to be up there with the big boys and it is frustrating because we aren't far away from turning that corner but to lose four on the bounce is disappointing.

"It took a wonder goal to beat us."