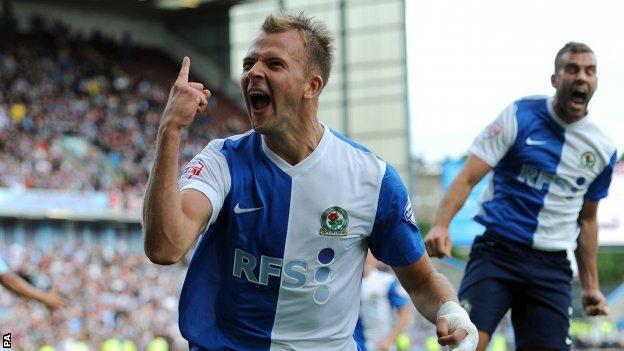 Jordan Rhodes scored his 13th goal of the season to earn Blackburn Rovers a second away win of the season at struggling Yeovil Town.

The striker's second-half goal ended Yeovil's four-match unbeaten run to leave the Glovers second from bottom in the Championship.

Tom Cairney and David Dunn went close in a dominant Blackburn first half.

After the break, Ishmael Miller hit the bar and Joe Ralls struck the post for Yeovil.

The win moves Blackburn to within four points of the play-off zone after recording back-to-back victories for the first time since October.

Blackburn striker DJ Campbell, who was one of six people questioned as part of a spot-fixing investigation and has been placed on bail until April 2014, was left out of Rovers' match-day squad - despite the 32-year-old returning to training this week.

Yeovil, who went into the game after successive draws, welcomed back goalkeeper Marek Stech following a four-month lay-off after he broke two bones in his hand against Birmingham City in August.

And Stech was busy early on as Blackburn piled on the pressure, with Cairney, Dunn and Rhodes all going close.

Yeovil were much improved in the second half, with Miller's powerful shot hitting the crossbar.

But, Rovers made Yeovil pay for some slack defending shortly before the hour mark when Dunn fed Rhodes, who clinically finished into the top corner.

Undeterred by the setback, Yeovil continued to threaten and came inches away from an equaliser minutes later when Ralls saw his curling effort crash off the post.

"It's a disappointing result but we mustn't be devastated about it.

"We didn't get our passing game going in the first half and kept giving the ball away. If you do that against a top team in this division then you'll be in trouble.

"In the second half we kept the ball better, created a number of chances and hit the bar and the post. We were in the ascendancy, but then their goal came on the break against the run of play."

"Jordan is a top lad, his manners are unbelievable, he's polite and popular at the training ground.

"His work rate is phenomenal, he never moans or gets carried away and all he's bothered about is his next goal - it's a fantastic attitude to have.

"You saw today there's more than one player who will attract Premier League interest. I've got no problem with that as all of our players should want to play at the highest level. It's not just Jordan, we have a number of very good players."