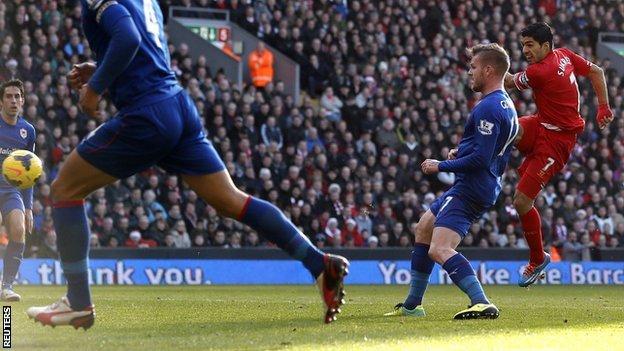 Luis Suarez helped Liverpool move top of the league with a win over Cardiff, as doubts remain over the future of Bluebirds manager Malky Mackay.

Mackay is in conflict with owner Vincent Tan and saw his side go behind through an 18-yard Luis Suarez volley.

Suarez, who signed a contract extension on Friday, set up Raheem Sterling for a tap-in and curled in a shot before Jordon Mutch headed in for Cardiff.

The visiting fans stayed after the game to chant their support for Mackay.

The Bluebirds boss stood on the Anfield pitch for some time after the final whistle and applauded his side's supporters, many of whom were holding up banners against Tan.

There had been doubts as to whether Mackay would be in the dug-out for the game after being told in the week to resign or face being sacked by Tan, who was at the match.

But despite the owner discussing his manager's future with chairman Mehmet Dalman at a meeting on Friday night, Mackay was in charge for a game which resulted in Cardiff's eighth defeat of the campaign.

The home side made sure they did not get distracted by the sideshow surrounding the game, and Suarez's performance came on the back of the 26-year-old signing a new four-and-half-year deal with the in-form Reds.

Liverpool have scored 17 goals in their last four league games and, depending on the result between Arsenal and Chelsea on Monday, they could head the top flight at Christmas for the first time since 2009, when they went on to finish second. The last time the Reds were top at Christmas and won the league was in 1987-88.

Cardiff started the game promisingly and went close early on when a swift counter attack resulted in Mutch playing a ball though to Craig Noone, whose 22-yard shot was palmed over by goalkeeper Simon Mignolet.

"If that is the last game for Malky Mackay as Cardiff manager, then he can be proud of his side's second half. The result was beyond them, but Cardiff played with determination and pride. Mackay stood tall in defeat on the pitch afterwards and possibly in the face of the sack."

Liverpool responded with a Suarez shot being deflected wide and a well-struck Sterling effort being blocked before they eventually broke through the Bluebirds blockade.

Joe Allen laid the ball off to Jordan Henderson on the left side of the area and he crossed for Suarez, who had initiated the move, to volley past keeper David Marshall for his 18th league goal of the season.

The Reds almost doubled their lead only to be twice denied by the post. First, Philippe Coutinho gathered a short Suarez corner, burst into the area and saw his angled shot come back off the woodwork.

Right-back Glen Johnson's cross then found left-back Jon Flanagan and his first-time side-foot came off the face of the same post before Marshall cleared.

The chances began to flow for Liverpool and after Henderson released Suarez with a piercing outside-of-the-boot pass, the Uruguayan squared for Sterling to tap in.

Suarez added an impressive third just before the break, latching on to the tireless and improving Henderson's backheel to curl a low shot into the bottom corner.

Cardiff reacted by putting the Anfield side under pressure in the second half and were rewarded with a goal when Mutch was left unmarked to steer in a header from Peter Whittingham's free-kick.

The visitors might have had a penalty for Reds centre-back Martin Skrtel holding Steven Caulker but referee Lee Probert saw no foul.

Liverpool regrouped and regained their grip on the game and, after Sterling's shot was saved, Suarez struck the follow-up against the outside of the post as the home side claimed an 11th league win of the season.

"Luis Suarez was outstanding again in a very good team performance. The fluency of our football in the first half was excellent, and our pressing is now at a really high level.

"We started the second half brightly, but are disappointed with a slack goal.

"I do not think about the title. I still believe it is for Manchester City to lose. We stay calm."