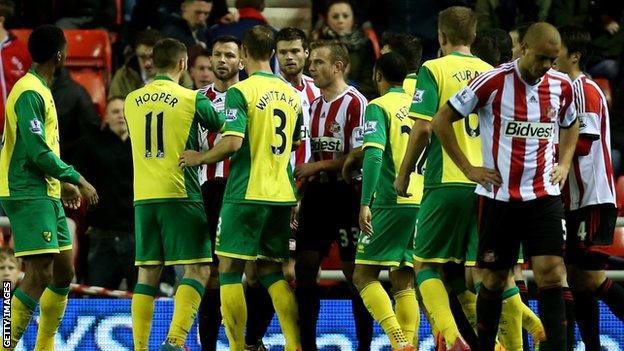 Sunderland head into Christmas bottom of the Premier League after a scrappy goalless draw with Norwich at the Stadium of Light.

The Black Cats are five points from safety, despite no wins for any of the clubs directly above them - Fulham, West Ham, Crystal Palace and West Brom.

The game was full of endeavour but quality was sparse.

Wes Brown, who was later sent off, went closest for Sunderland, his header hitting the post after a scramble.

Only one team have avoided Premier League relegation after being bottom at Christmas, West Brom in 2004-05.

The Baggies had the same record at this point as Sunderland, with 10 points from 18 matches.

The first half-hour was summed up by Lee Cattermole's attempt on goal, which was closer to a failed rugby conversion.

Sunderland finally moved up a gear with the break approaching, Jozy Altidore finding himself in space, only to take too long over his shot.

Moments later, Emanuele Giaccherini pulled the ball back to Phil Bardsley, whose shot was saved by John Ruddy at the near post.

With the tempo raised, Norwich went straight up to the other end, Gary Hooper cracking a goal-bound shot from 25 yards that Vito Mannone had to parry away for a corner.

This was a 0-0 draw that does Sunderland no good whatsoever. They didn't fashion enough clear-cut chances and the talking point was in injury time, when Wes Brown came clattering into Ricky van Wolfswinkel.

It was a horrible challenge.

Brown came closest to breaking the deadlock with a header that struck the post.

Norwich soaked up the pressure and looked dangerous on the break but Sunderland are in deep, deep trouble

The scrappiness continued after the break, Fabio Borini missing a good chance chance by shooting straight at Ruddy after a miscued clearance.

Hooper - Norwich's top scorer, with three goals in his past four games - also fluffed an opportunity, peeling away to give himself a free header at the back post, only to nod wide.

Soon after, Norwich goalkeeper Ruddy raced out of his goal, following Borini to the corner flag, only for the Italian forward to pull back to Ki Sung-Yueng 25 yards out. With the goal at his mercy and defenders frantically retreating, the South Korean chipped over.

Sunderland had a huge call for a penalty in injury time, when Adam Johnson's cross struck Sebastien Bassong's hip, despite the home team's claims of handball.

Immediately afterwards, Brown jumped into a challenge with substitute Ricky van Wolfswinkel close to the corner flag, earning himself a red card and a three-game Christmas and new year ban.

Norwich manager Chris Hughton: "We showed grit and determination but a draw was a fair result.

"I felt we were the team most likely to score. A clean sheet away from home is valuable and we need to maintain that going into the Christmas period.

"There's a fair bit of confidence in the team. We've been unlucky with injuries but we've got through that period with great spirit.

"Their handball shout for a penalty was never a handball and Wes Brown's challenge was reckless. The sending off was a correct decision."

"It was a tasty match but this is a good result. Wes Brown's was a crazy challenge. Ricky was going nowhere."

"Every time we win an important game - like the cup win - the next step is always down.

"We were very poor technically today. Playing extra-time on Tuesday is no excuse.

"I'm realistic. Time is running out (to stay up)."