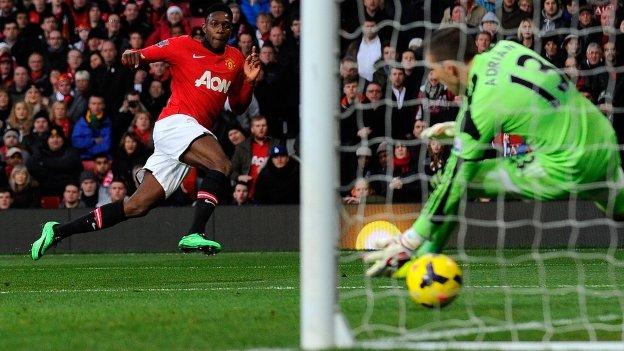 The England striker drove the ball low into the net from an angle early on as the dominant hosts recorded a seventh consecutive win at home to the Hammers.

Carlton Cole slotted in a consolation goal after racing clear.

Welbeck had not scored at Old Trafford since the 4-2 win over Stoke on 20 October 2012 but, from the moment he struck, there only looked one winner.

However, the striker then limped out of the action after the break with what looked like a knee injury, a troubling sight for United with Robin van Persie already missing for a month with a thigh strain.

There was better news in the return of Wayne Rooney, who missed the midweek League Cup win over Stoke with a groin strain. The England international was at the heart of an impressive home display with two assists.

West Ham fans have few good memories of trips to Manchester United, having lost on 20 of their previous 23 visits, including a run of six straight defeats and not a goal scored in the past five.

United have not lost more home games in a season since 2001-02, but three wins on the road in the past 11 days - including securing a League Cup semi-final against Sunderland - went some way to quieten the dissenting voices.

West Ham have won just two of their last 16 Premier League matches, a run that has included nine defeats.

And the hosts would have made the perfect start had it not been for goalkeeper Adrian, on his Premier League debut, beating out Tom Cleverley's close-range strike.

The former Real Betis man, given his chance ahead of Jussi Jaaskelainen after impressing in West Ham's midweek League Cup win at Spurs, quickly repaid Sam Allardyce's faith in him with a second important save, turning away Antonio Valencia's angled drive wide.

He was beaten soon after, however, as Welbeck, played in by the energetic Rooney, fired low across the goalkeeper and into the corner of the net.

And United extended their lead before the break as 18-year-old Januzaj played a one-two with Welbeck, cut inside a defender, and bent an unstoppable shot past Adrian from an angle.

After the break Jonny Evans saw a header cleared off the line and Javier Hernandez had a goal disallowed for offside before Young, on for Januzaj, curled the ball into the top corner after Rooney and Valencia combined.

The Hammers did pull a goal back late on as Cole, kept onside by substitute Alexander Buttner, raced clear and calmly slotted past David de Gea but it never looked like being enough to threaten their hosts.

"We played well today. I'm a wee bit disappointed we didn't take some more opportunities and I was disappointed not to keep a clean sheet but we got done on the break.

"The job is to keep our head down and keep winning games. There is confidence among the players. We are creating a lot of opportunities right now.

"Adnan Januzaj is doing really well. We are always hard on him, we always want more but he is doing remarkably well. He can score goals, he is a real talent.

"We would like to be doing much better, we want to be right at the top but we will continue to keep going."

"My disappointment was we played so well at Tottenham away a short time ago. We changed the team around to play some fresh legs but you didn't see the resilience and determination today.

"United were always going to come out fighting as they had lost two home games in a row but we didn't make life difficult for them.

"I looked at the stats and Manchester United are not very good in the second half if they are drawing at half-time. But we gave them two goals early on with some poor play and made it easy for them. The referee should have given us a penalty - I've seen them given here, but it wasn't given to us."