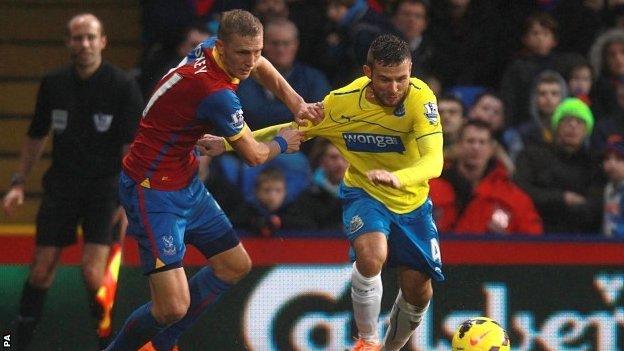 Hatem Ben Arfa completed the win when he smashed home from the spot after Jonathan Parr had fouled Shola Ameobi.

Ben Arfa had also forced a good save from Speroni moments earlier, while fellow Frenchman Yoan Gouffran struck the woodwork with a great shot from 20 yards as the Magpies finished strongly.

Palace manager Tony Pulis will be disappointed with his side's efforts at Selhurst Park - especially the first-half display - having impressed with two successive home wins since he took charge last month.

The bottom-three side now travel to Aston Villa and also face a daunting trip to Manchester City over the Christmas period.

Newcastle are in sixth and sit just six points behind the league leaders. Manager Alan Pardew - who was a key member of Palace's revival in the late 1980s - is seeing his squad begin to gel.

The French legion that arrived in January have settled in, prized midfielder Cabaye is in his best form since joining the club, and in Loic Remy they have one of the division's leading marksmen.

At a rain-swept Selhurst Park, they recorded their fifth away win so far - having managed only two last season - with a dominant performance.

After a non-eventful opening period, Newcastle took the lead through Cabaye. The 27-year-old, who missed last week's 1-1 draw against Southampton, scored his fourth of the season when his shot from 10 yards flew in via a slight deflection off Mile Jedinak.

Palace tried to hit back immediately and it needed a good save from Tim Krul to deny Cameron Jerome and Vurnon Anita cleared off the line after team-mate Mike Williamson had unwittingly sent the ball goalwards.

Pulis's men then suffered their second blow when Debuchy fired in a fizzing cross from the right that Remy gave up on but Gabbidon poked past his stranded keeper.

The former Stoke boss made two changes at half-time - bringing on winger Yannick Bolasie and Parr - but aside from a wild Jerome volley from seven yards, the Eagles failed to threaten the Magpies goal.

Newcastle brought on Ben Arfa. A peripheral figure this season, he added energy to the Magpies attack and went close before tucking away his penalty four minutes from time after Ameobi had been pushed over.

Pardew's side now have home matches against Stoke and Arsenal over the festive period.

"Not many teams are going to come here and win 3-0.

"I'm delighted with the players - they were terrific. The key was to control possession and make sure the ball didn't come into our box.

"Cabaye made a difference. His contribution was important - he gave us the x-factor. Ben Arfa gave us that. [Fabricio] Coloccini and Debuchy were immense, as was [Cheick] Tiote. I don't put Cabaye above the others.

"Five wins away says we have a good spirit. It's difficult to break us down and we score goals in open play."

"The two goals we conceded were poor.

"The one thing we have been since I came here is pretty solid and disciplined in coping with most things, but today we have gifted them two poor goals.

"From that point onwards we are chasing the game against a team I feel will finish in the top eight.