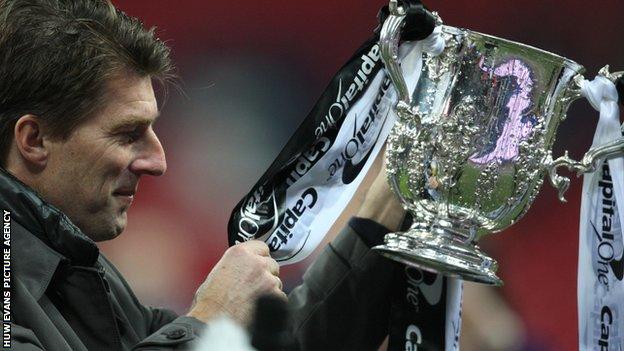 Swansea City have been drawn against Serie A title hopefuls Napoli in the knockout stages of the Europa League.

They face the Italians in the last 32 after they were knocked out of the Champions League.

Swansea welcome Napoli for the first leg on 20 February with the return leg seven days later in Italy.

"I'm delighted with the draw to pitch ourselves against one of the great powerhouses of Europe," said Swansea coach Alan Curtis.

"From a playing point of view it's a fantastic draw. To me they [Napoli] are always associated with Diego Maradona.

"You only have to watch highlights of [their] games to know it's going to be a hostile atmosphere."

Curtis said the prospect of facing Napoli, managed by Rafa Benitez, was much better than the thought of going to eastern Europe in the middle of winter.

"Europe has been a great a experience but if we had travelled over to the Russia or Ukraine it would have been a dampener just with the sheer amount of travelling," he added.

"Without a doubt we have got a chance… of getting through."

The Swans have 10 Premier League matches as well as a FA Cup third round tie at Manchester United before they are in Europa League action again.

Swansea City qualified for the Europa league for the first time in their history after winning their first English domestic silverware last season in the Capital One Cup.

They have played 10 matches in this season's Europa League to reach the knockout stages of the competition.

After negotiating the qualifying rounds, Michael Laudrup's men made a flying start to group A, winning their first two matches, including a 3-0 win away in Valencia.

They failed to win their last four group matches, conceding two added-time equalisers against Russian side Kuban Krasnodar and losing to Valencia at home.

In their final group game the Swans only needed a point to guarantee qualification but lost away in Switzerland to St Gallen.

But they progressed in second place as Russian side Kuban Krasnodar only drew in Valencia.

Teams could not have played a club they faced in group stage or a team from the same country, so as well as avoiding Valencia, the Swans, who are representing England, also avoided Spurs.

If they beat Napoli, Swansea will face the winners of the tie between Porto and Eintracht Frankfurt in the last 16.